(Dana Larsen)   The world’s most famous sailor-man may be tooting more than just spinach in his pipe.

Popeye is one of the world’s most well-known and beloved animated characters.

Since his creation, the pipe-puffing Popeye has become a global phenomenon, with millions of kids heartily munching on spinach in the hopes that it will make them as strong as the legendary sailor-man.

Yet is the spinach which gives Popeye his super-strength really a metaphor for another magical herb?

Have children around the world been adoring a hero who is really a heavy consumer of the forbidden weed – marijuana?

The evidence is circumstantial, but it is there, and when added together it presents a compelling picture that, for many readers at least, Popeye’s strength-giving spinach is meant as a clear metaphor for the miraculous powers of marijuana.

Popeye has gone through many different writers and artists since he was first created in 1929 by cartoonist Elzie Segar. Popeye was originally introduced as a minor character in Segar’s ongoing comic strip, Thimble Theatre. For 10 years Segar had been chronicling the adventures of Olive Oyl, her brother Castor, and her fiance Ham Gravy. At the start of one new adventure, Castor and Ham were to embark on an overseas voyage, and so they went to the docks and hired a sailor named Popeye. 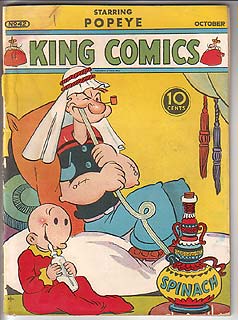 Soon Popeye had become a major part of the Thimble Theatre cast, and within a year Ham Gravy was written out of the strip as Popeye replaced him as Olive’s sweetheart. Wimpy was added to the cast three years later, and baby Swee’pea four years after that.

At first there was no explanation for Popeye’s amazing strength. But within a few years Popeye’s reliance on spinach was entrenched in the strip, and the basis of some ongoing jokes. By the time of the animated cartoons, decades after Segar’s death, the spinach had become an essential part of every plot, with Popeye’s consumption of the magic herb signaling a swift end to his foes.

The original comic by Segar was much more complex and nuanced than the later animated shorts. Segar introduced many strange and wonderful characters into Popeye’s world, including the malicious Sea Hag, whose enchanted flute enables her to fly and do magic; the wealthy Mr. Vanripple, whose beautiful daughter June rivals Olive for Popeye’ affections; the disturbing Alice the Goon who speaks only in squiggles; and the mighty Toar, whose monstrous strength challenges even Popeye’s.

Segar’s storylines were full of adult humor, including Toar having a crush on Popeye, calling him “hot stuff” and kissing him on the head. Popeye’s ongoing adventures included founding his own island nation called Spinachovia, and becoming “dictipator” over a country made up only of men.

So from these seemingly innocent beginnings, what evidence is there that Popeye is actually a stoner?

During the 1920s and ’30s, the era when Popeye was created, “spinach” was a very common code word for marijuana. One classic example is “The Spinach Song,” recorded in 1938 by the popular jazz band Julia Lee and Her Boyfriends. Performed for years in clubs thick with cannabis smoke, along with other Julia Lee hits like “Sweet Marijuana,” the popular song used spinach as an obvious metaphor for pot.

In addition, anti-marijuana propaganda of the time claimed that marijuana use induced super-strength. Overblown media reports proclaimed that pot smokers became extraordinarily strong, and even immune to bullets. So tying in Popeye’s mighty strength with his sucking back some spinach would have seemed like an obvious cannabis connection at the time.

Further, as a “sailor-man,” Popeye would be expected to be familiar with exotic herbs from distant locales. Indeed, sailors were among the first to introduce marijuana to American culture, bringing the herb back with them from their voyages overseas.

Segar did make other, more explicit drug references in his comic strip. One ongoing 1934 plotline had Vanripple’s gold mine facing corrupt, thieving workers. Popeye discovers that the mine manager is feeding his men berries from a bush whose roots are soaked in a nasty drug. Consuming the drugged berries removes human conscience, making people more violent and willing to commit crime.

Popeye falls under the influence of the laced berries and becomes surly and mean, striking out at his friends and allies. Yet he still manages to get five gallons of “myrtholene,” a joy-inducing drug which he pours over the plant’s roots. The new berries produce delirious happiness, and as Popeye says, “When a man’s happy he jus’ couldn’t do nothin’ wrong.”

Segar died in 1938, and the strip was taken over by others in the following decades. As the Popeye character was re-interpreted by others in print, animation and film, other indicators of a marijuana subtext have continued to pop up.

For example, in many of the animated Popeye cartoons from the 1960s, Popeye is explicitly shown sucking the power-giving spinach through his pipe.

Further, in the comics and cartoons made during the ’60s, Popeye had a dog named Birdseed. Surely the writers who named Popeye’s dog during this “flower power” era were aware that cannabis was in fact America’s number one source of birdseed until it was banned?

Another slightly different drug reference occurs in the 1954 cartoon, Greek Mirthology. In the cartoon, Popeye tells his nephews the story of his ancestor, Hercules. Hercules, who looks just like Popeye, is shown sniffing white garlic to gain his super strength. By the end of the cartoon Hercules has discovered spinach and switches over to it. Is this a metaphor for the benefits of cannabis over cocaine or snuff?

Another animated film shows Popeye carefully tending a crop of spinach plants reminiscent of a cannabis patch. He carefully takes cuttings, dips them into rooting gel and plants them in his outdoor garden. He even gives each plant a special feeding mix from a baby bottle. Pot growers worldwide would recognize the unique way that Popeye cares for his sacred crop.

I Yam What I Yam

Some have commented on the parallel between Popeye’s famous phrase, “I yam what I yam,” and the statement, “I am that I am,” made by God to Moses in the Old Testament. In the story, God speaks to Moses through a magical burning bush, which was not consumed by the fire. Many different people and faiths, including Rastafarians and various early Christian sects, have believed that the biblical burning bush is a reference to the cannabis plant.

So in this context, the use of phrase, “I yam what I yam,” can be seen as a reference to Popeye’s use of the burning cannabis bush, which creates his higher awareness of the self-reflective nature of the Godhead.

The only Popeye strip to ever explicitly refer to the pot/spinach connection was published in the 1980s by illustrator Bobby London. The comic showed Popeye and Wimpy picking up a load of “pure Bolivian spinach.”

London did the syndicated Popeye daily strip for King Features from 1986 to 1992, and was known for putting adult, controversial themes into his work. He had previously worked on the short-lived comic book Air Pirates, which showed Mickey and Minnie Mouse having sex, getting high and smuggling drugs.

London was eventually fired from Popeye for writing an allegorical satire about the abortion issue. No new Popeye strips are now being written; those running in daily newspapers are all repeats.

Whether Popeye ‘s many pot references are intentional or not, some see amazing depths and layers of meaning within the Popeye saga. An author and online artist named Michaelm provides the following analysis:

“Both characters try to swoon the premier oil source, Olive Oyl. Bluto begins to understand Popeye is too competitive so he decides to eliminate him. He chains Popeye down, captures Olive Oyl, and approaches the point of rape. But in the end Popeye manages to suck the ‘spinach’ through his pipe, grows strong with hemp, breaks free and defeats the evil corporations, saving her from industrial pollution and oppression.

“Relieved and happy, she gives herself back to the natural cycle, then Popeye smiles, winks and toots his pipe.”

While this is likely reading far more into the strip than any of its creators ever intended, it is an excellent example of the iconic status that Popeye has achieved among some quarters of the cannabis community.

One Response to What’s In Popeye’s Pipe?