(Yousef)   The news was welcomed by many around the world this week when reports about a decision taken by Egypt’s current military government to open the Rafah crossing with Gaza surfaced. But what does the opening of Rafah mean? There will undoubtedly be those trying to proclaim that life is on the up and up in Gaza now and that the siege is over. But Gaza and the siege that entraps it is immensely complicated. Ignoring the nuances of this policy and thinking that Gaza is equivalent to a solid black box that just had its lid opened is entirely misleading. It is important, especially as the anniversary of the attack on the Mavi Marmara approaches, to understand what the opening of Rafah means and does not mean, and to redouble our efforts to raise awareness about, and challenge, the continued Israeli siege of the Gaza Strip. 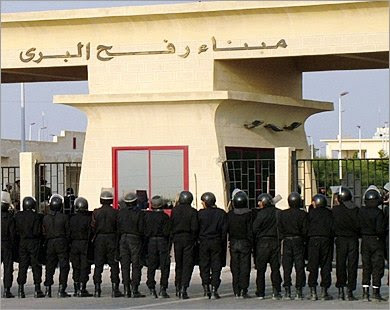 What the Opening of RafahDoes Not Mean: The siege is over.
The siege of the Gaza Strip is a multi-layered closure with many dimensions. Several closure policies contribute to the siege effect, and the opening of Rafah is unlikely to have a major impact on the overall effect simply because the remaining closure policies, enforced by Israel, are not changing.
First, what exactly is the Rafah Crossing? Rafah is a Palestinian town in the Gaza Strip which straddles the border with Egypt. A terminal at the border exists to facilitate the travel of people across the border, but Rafah is not designed as a crossing for supplies. The opening of Rafah, while it may allow for people in Gaza to exit (with the permission of Egypt still required of course), has little effect on the actual quantity of goods coming in and out of Gaza.
The other layers of Siege 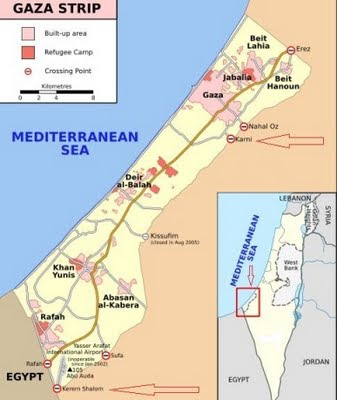 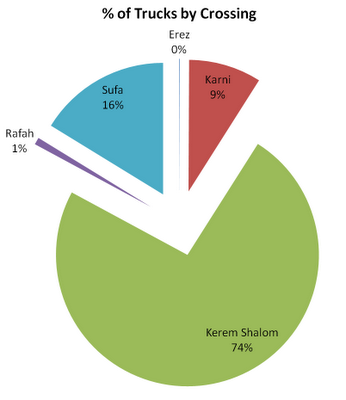 The Other Crossings: For logistical, historical and infrastructural reasons, other crossing points into Gaza are ideal for the entry of commercial or humanitarian goods. Using data from the UN Office for the Coordinate of Humanitarian Affairs, which keeps track of what is allowed into Gaza, when and through which entry, we can see a stark contrast between the different crossings. Aggregate data from June 19, 2007 through May 19, 2011 presented in this pie chart exposes just how few goods come through the Rafah crossing.
But this chart also doesn’t tell the whole story. Today, most of these crossing have been closed, and in fact, thus far in 2011 95% of trucks that were permitted entry to Gaza came through the Kerem Shalom crossing. Israel has, over time, practically shutdown all other crossings.
Israel’s multi-decade occupation of Gaza, and Gaza’s history as an integral part of historic Palestine for millenia, created infrastructure and logistical realities which make supplying it from the north far more easy than the south. The population density of Israel/Palestine over time has always been greater than that of Egypt’s Sinai, meaning resources would be centrally located in the middle of historic Palestine and distributed naturally to its perimeter.
By retaining total control over the other crossings, Israel is still able to maintain its siege policy to practically the same exact extent as before the opening of Rafah. Unless Egypt and Palestine completely revamp the Rafah crossing and the infrastructure around it on both sides of the border, this is unlikely to change. Also, such changes are highly unlikely for both political and economic considerations. It is simply not a cost effective investment to bring supplies to Gaza in a roundabout fashion when the land it has always been economically integrated into is to its north. Further, separating Gaza from historic Palestine, in anyway, is a political minefield because of its potential implications to the struggle for Palestinian self-determination.
Electricity and Water: For many of the same reasons explained above, Gaza is overwhelmingly dependent on Israel when it comes to electricity. This 2010 special focus report from UN OCHA states “the Gaza Strip’s needs range between 240 and 280 megawats (MW), of which at least 42 percent is purchased from Israel, distributed in separate feeder lines along the Gaza Strip, and six to seven percent is purchased from Egypt, distributed mainly to the Rafah area“
It explains the genesis of the electricity problem well:

The shortage of electricity in the Gaza Strip dates back to June 2006, when the Israeli Air Force destroyed all six transformers at the GPP during an air strike. Five months later, the power plant resumed production, but at a signiﬁcantly reduced level; producing around 65 MW (out of 80MW of potential capacity), compared to 118MW at peak production (out of 140 MW of potential capacity) prior to the bombardment.

Israel’s imposition of a blockade on the Gaza Strip in June 2007, following the Hamas take-over, further tightened existing restrictions on imports of spare parts, equipment, consumables and industrial fuel required for the operation of the power plant and the electricity network.. As a result, there has been a chronic shortfall in the GPP’s level of electricity production. Since January 2010, the daily electricity deﬁcit has increased further, following the expiration of the European Commission’s direct subsidy to the fuel purchase for the GPP. Since this time, the power plant has twice had to shut down completely, due to lack of fuel. The plant now operates using one turbine, producing only 30 MW of electricity, compared to its average production of 60-65 MW in 2009.

Israel’s control over the vast majority of electricity generated outside of Gaza, and their ability to deny the sustainable development of electricity generation inside Gaza by preventing the materials necessary for bringing the power-plant up to capacity, gives them effective light-switch control over Gaza.
Electricity has a direct impact on the issue of clean water as well. Amnesty International reports that 90-95 percent of the drinking water in Gaza is contaminated and unfit for consumption. The United Nations even found that bottled water in Gaza contained contaminants, likely due to the plastic bottles recycled in dysfunctional factories. The lack of sufficient power for desalination and sewage facilities results in significant amounts of sewage seeping into Gaza’s coastal aquifer–the main source of water for the people of Gaza. 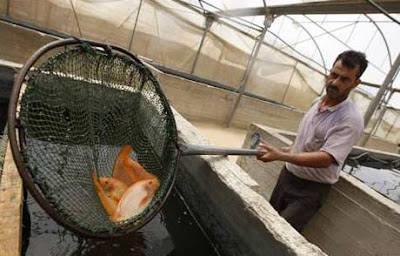 The Blockade: People often use the words blockade and siege interchangeably and this is simply inaccurate. The blockade of Gaza is enforced by the Israeli navy off the coast of Gaza and in Gaza’s territorial waters. The siege is a combination of restrictive and punitive policies which includes the blockade, but also some of the other issues discussed above. The blockade itself, however, has a specific but equally devastating impact on Gaza, its people and its economy. For Gaza’s fishing industry in particular this has been destructive. Israel enforces it’s illegal naval blockade at the 3-nautical mile mark (most of the fish native to Gaza’s territorial water’s are beyond this mark) and when Gaza’s fisherman get too close, they get shot. In fact, three fisherman were injured just this morning when Israeli naval boats fired on them.
While Israel argues its blockade is to keep weapons out of Gaza, it has yet to provide an explanation as to why it is shooting Palestinian fisherman coming from Gaza on dinghies. The effects of this have been so severe, that a coastal territory with a rich seafaring history farms fish on land and imports fresh fish now from Israel. Needless to say, the opening of the Rafah crossing will have little impact on this aspect of the siege.
What the Opening of Rafah Does Mean: The Closing of A Dark Chapter in Egypt’sHistory
The siege of the Gaza Strip is a disgraceful policy that collectively punishes civilians in direct opposition to international humanitarian law and is an ugly scar on the conscience of the international community. Egypt, sadly, played an undeniable roll in this policy under the Mubarak regime despite the fact that most Egyptians vehemently disagreed with this policy. While the Egyptian closure of Rafah was a minor contributor to the overall effects of the siege compared to Israeli restrictions, Mubarak regime complicity was viewed as treacherous in the eyes of most in the Arab and Muslim world. Most Palestinians and frankly most people around the world knew that the people of Egypt did not agree with what the government of Egypt was doing. Any who doubted this were thoroughly convinced after January 25th, 2011.
However, the extent to which this truly is the end of a dark chapter in Egyptian history will be determined by what kind of role the new Egypt will play toward Gaza, and whether the opening of Rafah is the first or last step it takes toward breaking the Israeli-led policy of siege. Making sure Palestinians in Gaza can travel freely in and out of the newly opened Rafah crossing, without discriminatory visa and security-check delays which have debilitated travel in the past, would be an immensely important next step in the right direction.
http://blog.thejerusalemfund.org/2011/05/what-opening-rafah-means-doesnt-mean.html
Tweet