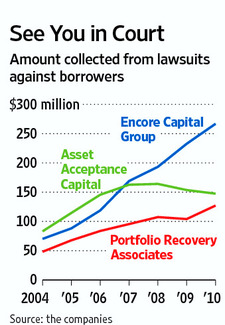 In September 2009, Jeffrey Stearns, a concrete-company owner, answered a knock at the door from a Hancock County, Ind., deputy sheriff. The deputy was holding a warrant to arrest Mr. Stearns for not paying $4,024.88 owed to a unit of American International Group Inc. on a loan for his pickup truck.