US Fingerprints All Over Honduran Coup

(RebelReport)   There is a lot of great analysis circulating on the military coup against Manuel Zelaya in Honduras. I do not see a need to re-invent the wheel. (See here here here and here). However, a few key things jump out at me. First, we know that the coup was led by Gen. Romeo Vasquez, a graduate of the US Army School of the Americas. As we know very well from history, these “graduates” maintain ties to the US military as they climb the military career ladders in their respective countries. That is a major reason why the US trains these individuals. 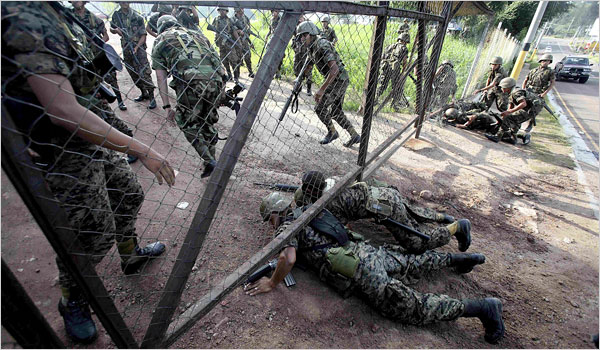 It is impossible to imagine that the US was not aware that the coup was in the works. At minimum, the US could have flexed its tremendous economic muscle before the coup and told the military coup plotters to stand down.

By Jeremy Scahill
Secondly, the US has a fairly significant military presence in Honduras. Joint Task Force-Bravo is located at Soto Cano Air Base, Honduras. The base is home to some 550 US military personnel and more than 650 US and Honduran civilians:

They work in six different areas including the Joint Staff, Air Force Forces (612th Air Base Squadron), Army Forces, Joint Security Forces and the Medical Element. 1st Battalion, 228th Aviation Regiment, a US Army South asset, is a tenant unit also based at Soto Cano. The J-Staff provides command and control for JTF-B.

Significantly, according to GlobalSecurity, “Soto Cano is a Honduran military installation and home of the Honduran Air Force.”

This connection to the Air Force is particularly significant given this report in NarcoNews:

The head of the Air Force, Gen. Luis Javier Prince Suazo, studied in the School of the Americas in 1996.  The Air Force has been a central protagonist in the Honduran crisis.  When the military refused to distribute the ballot boxes for the opinion poll, the ballot boxes were stored on an Air Force base until citizens accompanied by Zelaya rescued them.  Zelaya reports that after soldiers kidnapped him, they took him to an Air Force base, where he was put on a plane and sent to Costa Rica.

It is impossible to imagine that the US was not aware that the coup was in the works. In fact, this was basically confirmed by The New York Times in Monday’s paper:

As the crisis escalated, American officials began in the last few days to talk with Honduran government and military officials in an effort to head off a possible coup. A senior administration official, who briefed reporters on the condition of anonymity, said the military broke off those discussions on Sunday.

While the US has issued heavily-qualified statements critical of the coup—in the aftermath of the events in Honduras—the US could have flexed its tremendous economic muscle before the coup and told the military coup plotters to stand down. The US ties to the Honduran military and political establishment run far too deep for all of this to have gone down without at least tacit support or the turning of a blind eye by some US political or military official(s).

Here are some facts to consider: the US is the top trading partner for Honduras. The coup plotters/supporters in the Honduran Congress are supporters of the “free trade agreements” Washington has imposed on the region. The coup leaders view their actions, in part, as a rejection of Hugo Chavez’s influence in Honduras and with Zelaya and an embrace of the United States and Washington’s “vision” for the region. Obama and the US military could likely have halted this coup with a simple series of phone calls. For an interesting take on all of this, make sure to check out Nikolas Kozloff’s piece on Counterpunch, where he writes:

In November, Zelaya hailed Obama’s election in the U.S. as “a hope for the world,” but just two months later tensions began to emerge.  In an audacious letter sent personally to Obama, Zelaya accused the U.S. of “interventionism” and called on the new administration in Washington to respect the principle of non-interference in the political affairs of other nations.

Here are some independent news sources on this story:

School of the Americas Watch

3 Responses to US Fingerprints All Over Honduran Coup