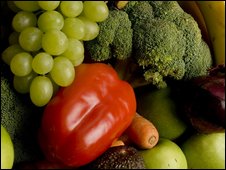 Organic food is no healthier than ordinary food, a large independent review has concluded.

Just as we are told that tap water is very good for us, sugestive Independent studies just like this one are used to manipulate public opinion.

“There is little difference in nutritional value and no evidence of any extra health benefits from eating organic produce” UK researchers claimed.

It is well know tha organic food contains higher amount of nutrients do to the plant’s better ability to grow untouched by poisonous pesticides that disrupt the natural equilibrium of the plant. Anyone that has ever tried organic fruits and vegetables can imediately tell the big difference in taste and quality.

Here is a CNN health article talking as an example of this.
Nutrition in Organic Food

The report, that was commisioned by The Food Standards Agency, said “the findings would help people make an informed choice”.

How can this irresponsible release of information help anyone. The report is rather disinforming people by sugesting that eating irradiated, genetically modified, pesticide poisoned food has no nutritional difference over natural, clean food.

Researchers from the London School of Hygiene and Tropical Medicine say they looked at all the evidence on nutrition and health benefits from the past 50 years.

As evidence of their double talk, The Food Standards Agency aknowledged that without large-scale, longitudinal research it is difficult to come to clear conclusions on this and that better quality studies were needed. However they published their story on The American Journam of Clinical Nutrition

The Soil Association criticised the study and called for better research.