J.P. Morgan Chase & Co. ignored or dismissed warning signs about the Madoff fraud even as it earned hundreds of millions of dollars from its relationship with his firm, according to a lawsuit unsealed Thursday.

The $6.4 billion lawsuit, filed in federal bankruptcy court, claims that bankers at J.P. Morgan discussed the possibility that Bernard Madoff was operating a Ponzi scheme, worried that a firm of such size was audited by a storefront accountant and called his returns “too good to be true.”

“While numerous financial institutions enabled Madoff’s fraud, JPMC was at the very center of that fraud, and thoroughly complicit in it,” according to the 115-page lawsuit, filed under seal in December by Irving Picard, the trustee seeking to recover money for Mr. Madoff’s victims and made public on Thursday.

J.P. Morgan said in a statement that the lawsuit “is meritless and is based on distortions of both the relevant facts and the governing law.” The bank said it “did not know about or in any way become a party to the fraud orchestrated by Bernard Madoff.”

The complaint seeks the return of nearly $1 billion in J.P. Morgan’s profits and fees, and $5.4 billion in damages. It goes into great detail about the bank’s alleged efforts, starting in about 2006, to make money by offering products tied to Mr. Madoff through investment funds that fed money to him.

J.P. Morgan only reported its suspicions of Mr. Madoff to British authorities in late October 2008, two months before he surrendered, the lawsuit said. In a suspicious activity report filed with Britain’s Serious Organised Crime Agency, the bank said the performance of Mr. Madoff’s investments appeared to be “too good to be true—meaning that it probably is.”

Even that warning was made in passing, the lawsuit said. It came after a London employee of J.P. Morgan was threatened while trying to redeem the bank’s money from a Madoff-related fund by a fund employee who mentioned having “Colombian friends” who could “cause havoc,” adding, “we know where to find you.”

Towards the end of 2008, J.P. Morgan pulled out about $276 million it had invested in funds that channeled money to Mr. Madoff—and asked those funds to keep the move quiet, according to the lawsuit.

The lawsuit offers a detailed account of the more than two decade relationship between J.P. Morgan and Mr. Madoff. In 2006, when J.P. Morgan started to consider structuring products involving funds that channeled money to Mr. Madoff, it began to take a look at the feeder funds and other entities related to his business.

The lawsuit claims that the bank didn’t pay attention to billions of dollars passing through the Madoff firm’s main J.P. Morgan account, much of it by hand-written check, or to discrepancies in the account balance and unreported obligations—including a $95 million loan made in 2005.

“They had, legally, an obligation to make inquiry, and they didn’t,” said David Sheehan, an attorney for Mr. Picard. “You’re literally seeing millions of dollars going in and out on a daily basis, and not one phone call is being made.”

In response, the bank said in its statement Thursday that Mr. Madoff’s firm “was not an important or significant customer” in the scheme of its overall commercial banking business.

The trustee’s suit claims that the bank collected an estimated half a billion dollars in fee and interest payments. 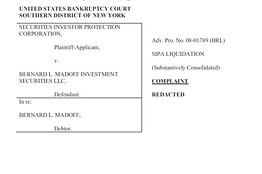 Various J.P. Morgan employees raised questions about Mr. Madoff’s credibility, but the concerns went nowhere, the suit alleges. As its Equity Exotics & Hybrids Desk began exploring investments tied to Madoff feeder funds, the suit says, it found that the fund managers didn’t know the names of Mr. Madoff’s counterparties, had no input or control over his trading activity, and hadn’t even been able to see his operations.

While bankers sought to create products tied to Mr. Madoff’s firm, its risk managers had a conversation with him in March 2007, where he informed them that he wasn’t willing to engage in “full due diligence,” according to the lawsuit.

On more than one occasion, the suit alleges, bankers expressed concern about the fact that a firm of such a large size was audited by a small suburban firm. One wrote in an email, “Let’s go see (auditors) Friehling and Horowitz the next time we’re in NY…to see that the address isn’t a car wash at least,” according to the lawsuit, referring to the accountants.

In 2007, an employee said he had heard from a colleague over lunch that “there is a well-known cloud over the head of Madoff and that his returns are speculated to be part of a [P]onzi scheme—he said if we google the guy we can see the articles for ourselves—Pls do that and let us know what you find.”

According to the lawsuit, the bank looked at Mr. Madoff’s firm more exhaustively in 2008, after its troubled acquisition of Bear Stearns.

As part of that review, bank employees allegedly met with Sonja Kohn, the head of Bank Medici, whom Mr. Picard has separately accused of being an accomplice of Mr. Madoff by funneling money into his operation, and with an executive at the Fairfield Greenwich Group, which also operated feeder funds.

Afterwards, an employee told colleagues that Mr. Madoff’s business associates knew very little about him, and seemed “scared” to push him for answers, the suit says.

“Fairfield claims to have seen the 19th floor,” the center of Mr. Madoff’s trading operations, the employee wrote, “but…I am not entirely convinced that Madoff allowed them to actually enter the trading area.”

The bankers at J.P. Morgan concluded that the feeder funds had only a faxed confirmation from Mr. Madoff that trades were occurring, but couldn’t verify it.

“It’s almost a cult [Madoff] seems to have fostered,” the employee wrote.

Write to Michael Rothfeld at michael.rothfeld@wsj.com