Three heroes of 9/11 die of cancer in five days

(NY DAILY NEWS)   A firefighter and two cops who worked at Ground Zero in the days and weeks after Sept. 11 have died of cancer in the past five days, the Daily News has learned.

Family members and advocates are blaming their deaths on toxins released into the air after the twin towers collapsed – and they’re urging Congress to act on a bill that would help pay for their medical care.

“Everybody is denying that this stuff is connected to 9/11, but it is,” said Stephen Grossman, whose son Robert died of cancer on Friday at the age of 44.

Robert Grossman was a police officer in Harlem who worked at Ground Zero for several weeks after Sept. 11.

“He never once said he was sorry he went down there,” Grossman said. “None of them walked away even though they all knew it was really dangerous.”

Grossman said even though his son lost his battle, there are still many more first responders who are sick.

“This country just says, ‘That’s fine. We’ll just wait another 15 to 20 years and you’ll all be dead and we’ll all be sorry,'” he said. “This country is better than that.”

The James Zadroga 9/11 Health and Compensation Act – named after an NYPD detective who died from his post-9/11 ailments – is still sitting in Congress, and Grossman and others are urging lawmakers to act now.

“These three deaths are proof that we need this bill passed today – not a year from now,” saidJohn Feal, founder of the FealGood Foundation. 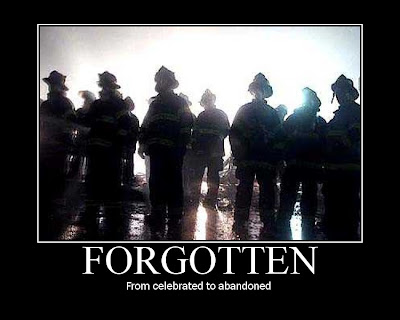 The bill would provide $10 billion for medical care for hundreds of first responders who have since become ill. But doctors haven’t directly linked these illnesses to the World Trade Center.

“The facts are indisputable,” said Kenny Specht, 40, a firefighter who worked for the NYPD on Sept. 11 and was diagnosed with thyroid cancer three years ago. “This week alone proves what we’ve been saying is absolutely occurring.”

Feal said the deaths of Grossman, Diaz and Mannetta in a span of five days is hard to ignore.

“How do you get this high cluster of serious cancer in just people that worked the pile? he said. “That isn’t a coincidence.”