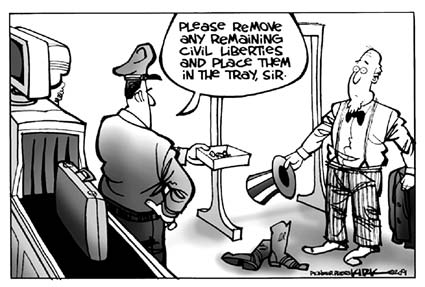 (RAW STORY)   A decision by the Supreme Court on Tuesday easing rules on police interrogations led the oldest member on the bench to read his dissent aloud in front of the court, the first time that’s happened this term.

“The Supreme Court on Tuesday made it easier for the police and prosecutors to question suspects, lifting some restrictions on when defendants can be interrogated without their lawyers present,” David Stoutreports for the New York Times.

In a 5-to-4 ruling, the court overturned its 1986 opinion in a Michigan case, which forbade the police from interrogating a defendant once he invoked his right to counsel at an arraignment or a similar proceeding.

That 1986 ruling has not only proved “unworkable,” Justice Antonin Scalia wrote for the majority, but its “marginal benefits are dwarfed by its substantial costs” in that some guilty defendants go free. Justice Scalia was joined by Chief Justice John G. Roberts Jr. and Justices Anthony M. Kennedy, Clarence Thomas and Samuel A. Alito Jr.

However, the paper notes, “In an angry dissent, Justice John Paul Stevens, who wrote the 1986 decision, said that contrary to the majority’s assertion, that decision protected ‘a fundamental right that the court now dishonors.’”

The Associated Press reports, “The Michigan v. Jackson opinion was written by Justice John Paul Stevens, the only current justice who was on the court at the time. He and Justices David Souter, Stephen Breyer and Ruth Bader Ginsburg dissented from the ruling, and in an unusual move Stevens read his dissent aloud from the bench. It was the first time this term a justice had read a dissent aloud.”

Stevens said that the “police interrogation in this case clearly violated petitioner’s Sixth Amendment right to counsel,” and that overruling the 1986 Michigan v. Jackson ruling “can only diminish the public’s confidence in the reliability and fairness of our system of justice.”

At The National Law Journal, Marcia Coyle observed, “The timing and contrast were striking: As President Barack Obama introduced Judge Sonia Sotomayor to the nation as his U.S. Supreme Court nominee, Justice Antonin Scalia, sitting on the high court bench, read parts of a 5-4 decision overruling a 23-year-old precedent on the right to counsel.”

“It was business as usual for the justices Tuesday but also a reminder of the importance of one vote on a Court still closely divided in key areas of the law,” Coyle noted.

A PDF of the opinion can be accessed at this link.