The Court Industrial Complex is a crooked warped form of Justice

I am the original owner who posted this. I am from Texas and I see corruption where I live as well. 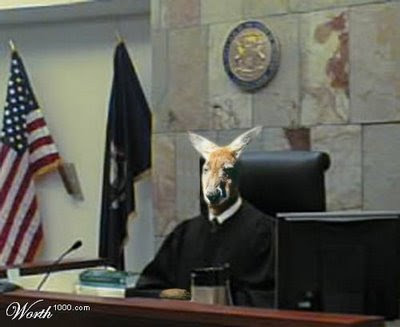 The Kangaroo Court is the pillar for the Court Industrial Complex. Image found from Report on Conditions blog.

If you are poor you have no rights to prove your innocence. That is that way of the Court Industrial Complex. If you don’t like it you can try to change the court establishment and suggest things we can do to change the system.

To make matters even worse must Federal and local Judges are either bought and paid for, killed via Tucson AZ style shootings because they stood up for what was right, or are losing their positions because of their moral standing. The court system is only in bed with rich and super rich law firms or in bed with the Prison Industrial Complex. Judges that do stand for justice and helping the poor end up getting assassinated and this is all true and we seen that with the Tucson Shooting because that federal judge and congresswomen was going to stand against Obamacare. The Court system is no longer about justice or even balance of law anymore but a business, a store, and a corrupt and warped sense of justice.

That is why the Court Industrial Complex is the very monster we are seeing these days. That is why we are seeing no Justice or even the Supreme Court simply stating that the U.S. Constitution is null and void.

The courts everywhere in America used to represent Justice when it all first started but then it became a business, a store, and apart of the crooked imperial machine. I now call it the Court Industrial Complex simply because judges are either corrupt or killed. That is also the way of the executive system as well. Presidents that go against the will of the elite are assassinated in public just like the shooting in Tucson Arizona or are corrupt to the core.

Most lawyers in America are corrupt because money is being made off of the suffering of the peasantry. One example is the abuse of copyright law for the personal wealth expansion of the super rich. The court system is not about helping the people and they serve no justice.

I humbly ask the American people that we peacefully set a resolution and a declaration to take down the Court Industrial Complex and create a new judicial system.