One of the biggest bankruptcies in history occurred on June 1st yet you would not know this by looking at the stock market.  In fact, the Dow Jones Industrial Average (DJIA) shot up by 220 points.  If we look at total assets, this is the fourth largest bankruptcy in history.  The Dow is made up of 30 companies that show a supposedly wide cross section of the American economy.  The company that filed for bankruptcy was General Motors and was actually one of the 30 components.  A company that dates back to 1908 and survived the Great Depression.  So how can it be that a company that employs 250,000 filing for bankruptcy is actually good for the stock market and makes the DJIA rally so strongly?  The easy answer is the stock market no longer reflects the economic reality on main street.

The U.S. Treasury and Federal Reserve have created an artificial system and the stock market is reacting to these new conditions.  These conditions now assume rock bottom low rates and financial institutions being continuously bailed out.  Yet this paradigm is not helping the American public that now has 25,000,000 unemployed or underemployed family, friends, or colleagues.  Think of the implication of the GM bankruptcy.  Right when the announcement was made there were details of laying off thousands of workers and closing numerous dealers.  The market rallies and unemployment this Friday will shoot up by another 500,000.  This disconnect is so obvious and shows the priorities of those pushing legislation.

Before we get ahead of ourselves, why would a bankruptcy of GM, a DJIA component lead to a strong rally?  First, let us look at the weighting of each of the 30 components:

The above is a reason I take very little stock with the DJIA but it is still widely regarded in the mainstream media as an accurate reflection of the overall stock market performance.  A better measure would be the Wilshire 5000 but how many times have you heard that market index in the media?  Let us focus on the above list I compiled a little further.  You notice that GM and Citigroup are all the way at the bottom?  That is why even if GM and Citigroup went straight to zero (GM practically did) it had very little impact on the DJIA.  Yet in reality, the bankruptcy impact is gigantic in the real world since it means tens of thousands more Americans out of work and a giant of American manufacturing giant was unable to stand on its own two feet.  So what do we hear on June 1st?

How convenient.  Of course, we have already experienced this with the removal of AIG and having it replaced with Kraft.  A government cheese recipient taken out by a true cheese maker.  The DJIA is a horrible indicator of longer term prosperity.  During the boom times bubbly stocks are put in, keep in mind the index is maintained by humans and as we have now found out, humans make all kind of errors including missing peaks and troughs.  Don’t believe me?  Let us take a look at some grand timing:

Bank of America added on February 2008

These are just a few examples.  First, you’ll notice that Microsoft and Intel (big companies no doubt) where added at a bubble point for technology stocks.  So when the tech bubble burst, the index took a much bigger hit because of these additions.  Next, we have the timely addition of Bank of America on February 2008!  When Bank of America was added it was trading around $45 per share.  Now it is trading at $11.37 and this is thanks to the crony banking system bailout.  Chevron was added right before our massive oil bubble.  So as you can see, the addition of companies to the DJIA is not exactly a good reflection of the economy.  In fact, some of the additions are indicators of bubbles and late party arrivals.

Now let us examine the list again.  First, the recent stock market crash was the deepest and widest since the Great Depression.  If we look at the DJIA, you will see why this is true.  First, 2 of the top 3 companies on the list were oil companies.  Well logically when the oil bubble burst these would get hammered as they did.  Next, there are many financial services companies on the list.  This during the boom distorted the market and made the DJIA bubble up over 14,000 yet this mark was a reflection of the bubble.  Now with the banking industry having Uncle Sam as number 1 on its Fave 5 menu, of course the DJIA tanked because it was heavily weighted on bubble industries.  Bank of America?  JP Morgan?  American Express?  Citigroup?  This list starts reading like the TARP recipient list.

It should be abundantly clear that the DJIA is not a good indicator of what is occurring on main street.  Yet it is something that is always referenced so it is important to understand what is truly reflected here.  Let us refer to the list again.  If you look at the top 10, three of these companies (Wal-Mart, McDonalds, and Coca-Cola) reflect the massive consumption economy that is the U.S.  Where are the major manufacturing companies?  In a way, seeing GM literally fall off the list is a testament to what our economy has become.  An almost completely consumption based economy.  Is it any wonder that Chinese students laughed openly when Timothy Geithner stated:  “Chinese assets are very safe,” referring to debt with the U.S. in a recent talk?  Politics aside, I’d laugh too.  Ben Bernanke and Geithner are busy selling off the U.S. to keep their banking cronies alive.  Where are the Pecora Investigations?  Why not demand the same stringent requirements of Bank of America, Goldman Sach, JP Morgan, and Citigroup as we do of Chrysler and GM?  Because those that operate the levers of power are either bought out or believe the banking oligarchy.

When you look at the Dow, it starts becoming abundantly clear what the U.S. Treasury and Federal Reserve think the country should look like.  And before you say that these places are independently operated, just look at former employers of our recent U.S. Treasuries.  They like the bubble era.  They want Americans to go back and buy cars on a yearly basis, purchase homes over and over, eat fast food, and purchase goods to numb the need to focus on reality.  That reality is for nearly 40 years we have spent more than we have earned.  Just look at this chart showing personal income growth and household debt: 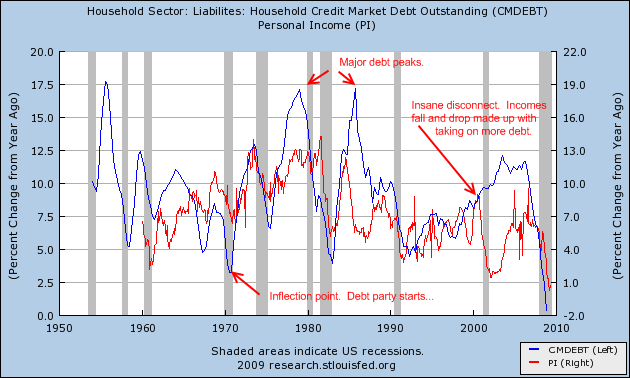 From the 1950s to the 1970s, growth in income tagged along with growth in debt.  Yet this completely became disconnected in the 1970s.  From that point on, taking on debt at higher levels seemed okay.  In the last few years in this bubble, we just took it to the extreme logical conclusion.  Just think for a second how irresponsible it was to give someone making $30,000 a year a $50,000 luxury car simply because they can make the monthly payment for 7 years?  Or what about giving the person making $40,000 a year a $500,000 mortgage?  Not only did this happen, but it occurred so many times that we are now years later left to deal with the fallout.  Yet the notion that we will go back to this world is absurd and that is what the stock market is betting on.  Our lives are changed forever.  The fact that we have students in China laughing at our U.S. Treasury is one of the many indications that the gig is up.  Our biggest lender is laughing.  This is not a good sign.

When I look at the Dow, I don’t see a reflection of the U.S. economy but more of a horse race ticket for the gambling casino.  AIG doesn’t make sense anymore?  Remove it since it is now owned by the U.S. government.  Don’t like GM or Citigroup?  Out they go.  It is a list of convenience.  We would be better off tracking the Wilshire 5000 or at a minimum, the S&P 500 but even that list has taken an unusually heavy love to financials.  But in this case, you can’t blame the actual index.  It is merely reflecting a country that became obsessed with financial services and tossed manufacturing to the wayside: 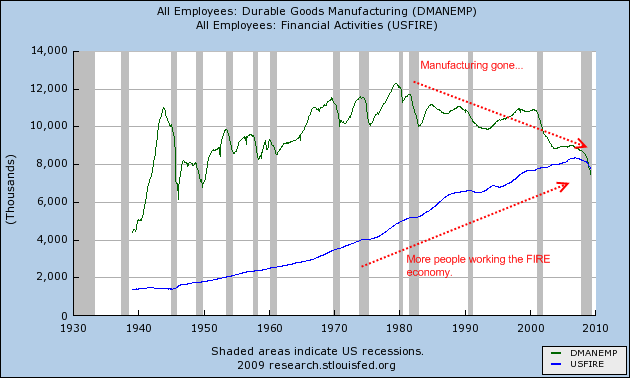 The chart above is rather telling.  It is somewhat ironic that on the same day, it is announced that both GM and Citigroup will be removed from the DJIA.  With manufacturing already gone and financial services slimming down, you tell me what emerging field is going to get us out of this recession?  Maybe Travelers Companies and Cisco are closer reflections to what is a stable Dow component.  Too bad it took this long to realize which companies were simply running on cheap money.