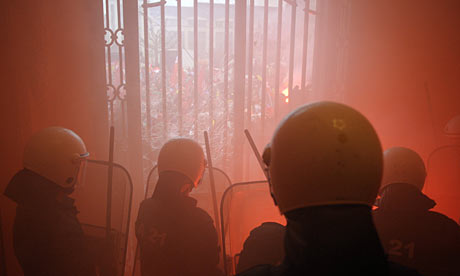 Police take on protestors at the ArcelorMittal HQ in Luxembourg on 12 May, 2009 Photograph: Jean-Christophe Verhaegen/AFP/Getty Images

(GUARDIAN)   Angry steel workers attacked the Luxembourg headquarters of ArcelorMittal, the world’s biggest steelmaker, during the company’s annual shareholders’ meeting yesterday, setting off smoke bombs and breaking through the front door in protest at temporary layoffs.

Buses had brought 1,000 workers from plants in northern France and Charleroi and Liège in southern Belgium. Some hurled cobblestones and steel fencing, smashing windows and tearing off a steel moulding from the ornate 1920s exterior as riot police lined up to protect the head office.

ArcelorMittal has halved production and is offering voluntary redundancy to 9,000 of its 315,000 staff around the world.

ArcelorMittal’s chief executive, Lakshmi Mittal, said the cuts were a “temporary suspension of production in view of the market conditions”.

“Customers have stopped buying steel and are using up their current inventory,” he told shareholders. “There is absolutely no point continuing to produce what we know we cannot sell.”