Former fellow of George Soros’ Open Society and current Stanford University scholar Evgeny Morozov has called on Google and other search engines to become thought crime enforcers, by providing warnings about websites that contain “conspiracy theories” such as the belief, held by a majority of Americans, that global warming is not primarily man-made.

Morozov, whose biography confirms him as a well-connected insider, decries in a Slate piece how the Internet is a useful tool for “People who deny global warming” as well as “the anti-vaccination movement,” calling on Google to provide a “socially responsible curated treatment” that would marginalize such beliefs by amending search results. 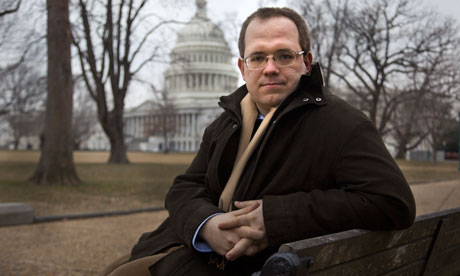 His solution is to, “Nudge search engines to take more responsibility for their index and exercise a heavier curatorial control in presenting search results for issues like “global warming” or “vaccination.” Google already has a list of search queries that send most traffic to sites that trade in pseudoscience and conspiracy theories; why not treat them differently than normal queries? Thus, whenever users are presented with search results that are likely to send them to sites run by pseudoscientists or conspiracy theorists, Google may simply display a huge red banner asking users to exercise caution and check a previously generated list of authoritative resources before making up their minds.”

Morozov describes the potential that such a move will be judged as Google “shilling for Big Pharma or for Al Gore” as “a risk worth taking”.

This represents a similar argument to Cass Sunstein’s “cognitive infiltration,” an effort by Obama’s information czar to slap government warnings on controversial websites (including those claiming that exposure to sunlight is healthy). In a widely derided white paper, Sunstein called for political blogs to be forced to include pop ups that show “a quick argument for a competing view”. He also demanded that taxes be levied on dissenting opinions and even suggested that outright bans on certain thoughts should be enforced.

Giving companies like Google, which has grown to virtually become the gatekeeper of the entire Internet itself and is already engaging in SOPA-like acts of censorship, the power to denote which political and scientific positions are acceptable and which are fringe “conspiracy theories” is an insult to free thinking and smacks of Chinese-style thought control.

Morozov’s argument is also completely undermined by the fact that the two so-called fringe “conspiracy theories” he forwards as being in need of Google’s thought crime control, skepticism about global warming and the dangers of vaccines, are views held by millions of Americans and are not “fringe” at all.

According to the most recent polls, less than half of Americans now believe that global warming is caused by human activity, a number that has been slipping for the past several years.

In addition, polls show that a quarter of Americans, some 75 million of them, believe that vaccines are unsafe and can cause autism. To characterize this as a minority conspiracy belief is like labeling Catholicism as a doctrine of a tiny fringe.

At best, views about global warming and the safety of vaccines can be described as being split, but to claim that skepticism over man-made climate change and the dangers of inoculations are “kooky” fringe conspiracy beliefs, as Morozov does in his article, is brazenly inaccurate and exposes the agenda-driven bias of his rhetoric.

This is further illustrated by the reader comments, which almost universally deride Morozov and attack his argument as being a thinly veiled demand for Internet censorship.

“The day Google starts doing things like this is the day I find a new search engine,” writes one.

“So, you are a supporter of internet censorship? Only of information that you disagree with, of course. So I assume Slate and NAF did not support the recent action regarding SOPA?” adds another.

Morozov’s rhetoric is merely one aspect of the wider move to turn the Internet into an echo chamber of establishment propaganda, drowning out alternative voices to the benefit of large pharmaceutical companies who make billions from selling risky vaccines and scientific bodies whose very survival depends upon the global warming myth being upheld.

It represents another effort to win an information war the establishment is currently losing, as Hillary Clinton herself admitted, by not just creating a new Orwellian Internet Ministry of Truth, as Bill Clinton demanded, but by ascribing this role to the very gatekeeper of the Internet itself – Google.