(RAW STORY)   China should step up to the plate as the leader of a new global economic order, and the US shouldn’t fear the establishment of a global currency because it would help the economy, billionaire investor George Soros says. 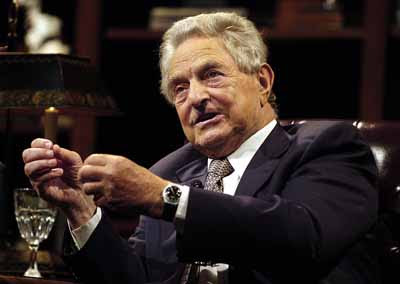 In a recent interview with the Financial Times, Soros said that China hasn’t been pulling its weight in reorganizing the global economy after last year’s economic collapse, and the way to convince China to lead is to allow it to “own” the reorganization of the global financial system that is underway.

“You really need to bring China into the creation of a new world order, a financial world order,” Soros told FT. “They are kind of reluctant members of the IMF. They play along, but they don’t make much of a contribution because it’s not their institution. … They have to own it the same way as, let’s say, the United States owns the Washington consensus, the current order, and I think this would be a more stable one where you would have co-ordinated policies. I think the makings of it are already there because the G20, in agreeing to peer reviews, effectively is moving in that direction.”

Peer reviews are a mechanism by which members of the G20 club of economic powers can review other members’ economic performance and warn those members of dangers to their economies.

Soros also advocated for the creation of at least a limited global currency, which he says would help reduce the imbalances in the global economic structure and would actually benefit the United States, whose dollar currently acts as a de facto global currency.

Soros said the IMF’s Special Drawing Rights — a kind of currency that IMF member countries can use to transfer money between countries — could be the backbone of a new global currency.

“I believe that basically the system is broken and needs to be reconstituted,” Soros said. “We cannot afford to have the kind of chronic and mounting imbalances in international finance. So, you need a new currency system and actually the Special Drawing Rights do give you the makings of a system and I think it’s ill-considered on the part of the United States to resist the wider use of Special Drawing Rights. They could be very, very useful now when you have a global shortfall of demand. You could actually internationally create currency through special drawing rights, and we’ve done it.”

Special Drawing Rights, or SDRs, were created in 1969 as a way of supplementing countries’ currency reserves. Their value is determined by a formula based on the values of the US dollar, the British pound, the Japanese yen and the Euro.

Recently, the IMF has been using SDRs to help out countries struggling under the weight of the global recession. As Soros noted, China itself has advocated creating a global reserve currency from the IMF’s drawing rights. European leaders such as British Prime Minister Gordon Brown and French President Nicolas Sarkozy have also called for an expanded role for the IMF in the emerging global economy.

Soros said that while the US received “great benefits” from having the US dollar as the default global currency, that time is now past because the US “abused” its currency’s power to create an imbalanced global trade system

“We have abused it and I don’t think we can continue abusing it anyhow,” Soros said. “So it is not necessarily in our interests to have the dollar as the sole world currency because as the world economy grows, it needs an additional currency and, if the dollar is that additional currency, it means that the US has to have chronic current account deficit. And that is not appropriate. I think it’s in our interests as well to reform the system.”

Some critics of the global financial system have argued that SDRs are the thin end of the wedge to the creation of a world government, arguing that institutions like the IMF and the G20 undermine the sovereignty of nations by taking control of economic policy out of the hands of national leaders. Soros’ comments are unlikely to assuage those concerns.