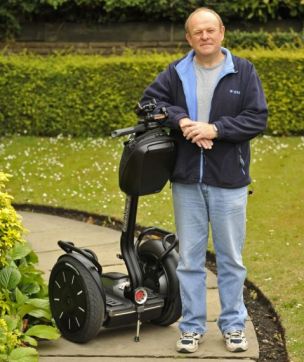 A wealthy British businessman who owns the company that makes the two-wheeled Segway has been found dead in a river in northern England after apparently falling off a cliff on one of the vehicles, police said Monday.

The body of 62-year-old James Heselden and a Segway personal transporter were found in the River Wharfe and he was prounced dead at the scene, West Yorkshire Police said.

Police said a witness had reported seeing a man fall Sunday over a 30-foot (9-meter) drop into the river near Boston Spa, 140 miles (225 kilometers) north of London.

“The incident is not believed to be suspicious,” police said, indicating that they do not believe anyone else was involved.

Heselden, who bought control of the New Hampshire-based Segway company in December, made his fortune through his firm Hesco Bastion Ltd., which developed a system to replace sand bags to protect troops.

Hesco Bastion is based in Leeds, near the tough Halton Moor area where Heselden grew up. He left school at 15 and first worked as a coal miner before becoming a businessman and philanthropist. Hesco Bastion said Heselden recently gave 10 million pounds ($15.9 million) to the Leeds Community Foundation, raising his total charitable giving to 23 million pounds.

“Jimi was an amazing man who, apart from being a wonderful success story for Leeds due to his business acumen, was also remarkably selfless and generous, giving millions to local charities to help people in his home city,” said Tom Riordan, the chief executive of Leeds City Council.

The battery-powered Segway, which is stabilized by gyroscopes, was invented by Dean Kamen, who founded the company in 1999.