Secret Service Hooker May Get US Visa, Green Card, Has Dubai Connections

(Debbie Schlussel)   Dania Londono Suarez, the prostitute at the center of the Secret Service scandal, may soon be in the United States on a visa and she will probably seek–and may get–other immigration benefits, such as a green card, as federal authorities seek her testimony regarding what happened between her and U.S. Secret Service agents during a Presidential trip to Cartagena, Colombia.

Secret Service Hooker Dania Suarez: Coming to America?
Congressman Peter King (Republican-New York) said on Friday that the testimony of Ms. Suarez, who has to date refused to talk to U.S. authorities, is “absolutely essential.”  It is U.S. practice, when the live testimony of foreign nationals is sought at a hearing (such as an appearance before King’s House Homeland Security Committee), to grant the foreign nationals a visa for entry into the United States.  But, when the foreign nationals are reluctant–as has been the case with Ms. Suarez (who is granting interviews to everyone else, including NBC News), the U.S. often offers a carrot, such as a long-term visa–available to “immigrants” who are “victims” of crimes and/or cooperate with the U.S. in pending legal matters.  After that, said visa holders often apply for and many are granted legal permanent residence also known as a “Green Card.”  Such benefits would likely also be conferred upon Suarez’s nine-year-old son, as well, if they are conferred on her. 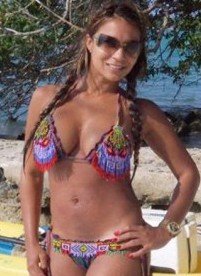 As I’ve reported in the past, El Salvadoran illegal aliens, who were detained by an Arizona ranch owner and given milk and cookies, were given visas, green cards, and, eventually, complete U.S. citizenship–by Bush Justice Department officials in exchange for their testimony against the ranch owner.  (They also ultimately obtained ownership of the ranch.)  It is likely that the Secret Service hooker, Suarez, will get a similar deal.

And there is another reason, Suarez may be ferreted to the U.S. and granted a long-term stay here.  While some of the Secret Service agents caught up in the scandal resigned or accepted their terminations, there are rumblings that one or more of the agents may challenge their firings.  Without the testimony of Suarez, their firings may not withstand litigation.

And there’s another concern about Suarez beyond the fact that she was in a position to blackmail and/or extort Secret Service agents protecting the President:  she has friends in Dubai, the United Arab Emirates’ largest nation-state and the place where the 9/11 hijackers had bank accounts and from which they got documents and IDs to help carry out their attacks.  Suarez told various media outlets that she jet-setted to Dubai with a friend when the story of her interaction with Secret Service agents broke.  (Good thing she didn’t have an Israeli stamp in her passport or prohibida la entrada–no entry.)

But who is her friend that took her to Dubai?  Is it a Dubai Arab Muslim “customer”?  Is it somebody who was in a position to pay her off to do something–such as blackmail or extortion–to Secret Service agents protecting the President, had he wanted to?

Without her testimony to officials, we’ll likely never know.  And that’s why we will soon see her with a visa and one-way ticket to the U.S., along with a lot of other fanfare. Only in America.

Sad, especially to those innocent, law-abiding people who are trying to get to the U.S. legally.  And a hooker who spreads her legs for a living will automatically get the golden ticket.  But this is the world and sad state of America in which we now live.  And it’s only getting worse.