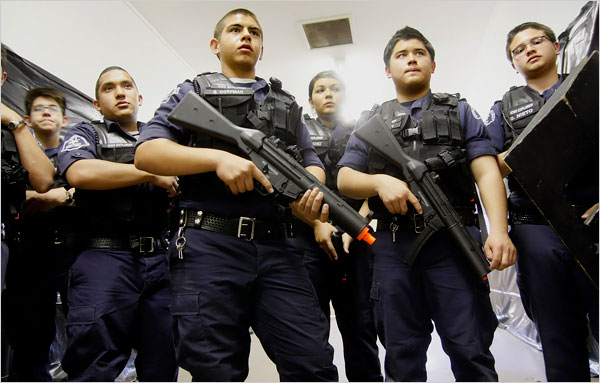 Explorers in a drill with the Imperial County, Calif., sheriff's office prepared to enter a building taken over by terrorists who had begun shooting hostages. Photo: Todd Krainin for The New York Times

(NY TIMES)   IMPERIAL, Calif. — Ten minutes into arrant mayhem in this town near the Mexican border, and the gunman, a disgruntled Iraq war veteran, has already taken out two people, one slumped in his desk, the other covered in blood on the floor.

“United States Border Patrol! Put your hands up!” screams one in a voice cracking with adolescent determination as the suspect is subdued.

It is all quite a step up from the square knot.

The Explorers program, a coeducational affiliate of the Boy Scouts of America that began 60 years ago, is training thousands of young people in skills used to confront terrorism, illegal immigration and escalating border violence — an intense ratcheting up of one of the group’s longtime missions to prepare youths for more traditional jobs as police officers and firefighters.

“This is about being a true-blooded American guy and girl,” said A. J. Lowenthal, a sheriff’s deputy here in Imperial County, whose life clock, he says, is set around the Explorers events he helps run. “It fits right in with the honor and bravery of the Boy Scouts.”

The training, which leaders say is not intended to be applied outside the simulated Explorer setting, can involve chasing down illegal border crossers as well as more dangerous situations that include facing down terrorists and taking out “active shooters,” like those who bring gunfire and death to college campuses. In a simulation here of a raid on a marijuana field, several Explorers were instructed on how to quiet an obstreperous lookout.

“Put him on his face and put a knee in his back,” a Border Patrol agent explained. “I guarantee that he’ll shut up.” 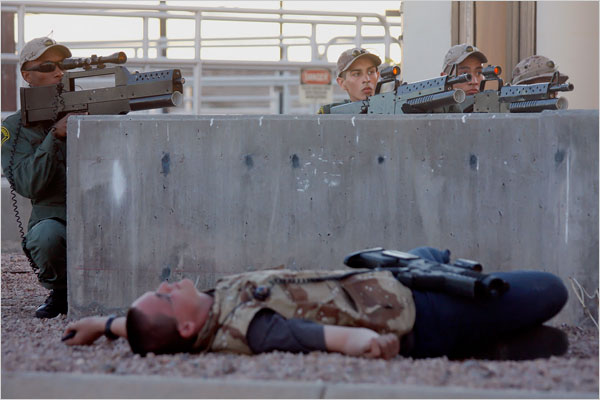 In a training exercise with the Los Angeles County Sheriff's Department, Explorers responded with a barrage of rifle fire after a sniper killed a team member. Photo: Todd Krainin for The New York Times

One participant, Felix Arce, 16, said he liked “the discipline of the program,” which was something he said his life was lacking. “I want to be a lawyer, and this teaches you about how crimes are committed,” he said.

Cathy Noriego, also 16, said she was attracted by the guns. The group uses compressed-air guns — known as airsoft guns, which fire tiny plastic pellets — in the training exercises, and sometimes they shoot real guns on a closed range.

If there are critics of the content or purpose of the law enforcement training, they have not made themselves known to the Explorers’ national organization in Irving, Tex., or to the volunteers here on the ground, national officials and local leaders said. That said, the Explorers have faced problems over the years. There have been numerous cases over the last three decades in which police officers supervising Explorers have been charged, in civil and criminal cases, with sexually abusing them. 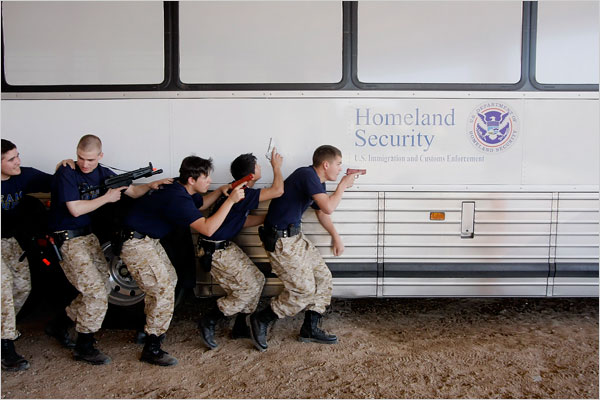 In an exercise called Tubular Assault, Explorers from Visalia infiltrated a bus that had been hijacked by a suicide bomber. Photo: Todd Krainin for The New York Times

Many law enforcement officials, particularly those who work for the rapidly growingBorder Patrol, part of the Homeland Security Department, have helped shape the program’s focus and see it as preparing the Explorers as potential employees. The Explorer posts are attached to various agencies, including the Federal Bureau of Investigation and local police and fire departments, that sponsor them much the way churches sponsor Boy Scout troops.

“Our end goal is to create more agents,” said April McKee, a senior Border Patrol agent and mentor at the session here.

Membership in the Explorers has been overseen since 1998 by an affiliate of the Boy Scouts called Learning for Life, which offers 12 career-related programs, including those focused on aviation, medicine and the sciences.

But the more than 2,000 law enforcement posts across the country are the Explorers’ most popular, accounting for 35,000 of the group’s 145,000 members, said John Anthony, national director of Learning for Life. Since the attacks of Sept. 11, 2001, and the wars in Iraq and Afghanistan, many posts have taken on an emphasis of fighting terrorism and other less conventional threats. 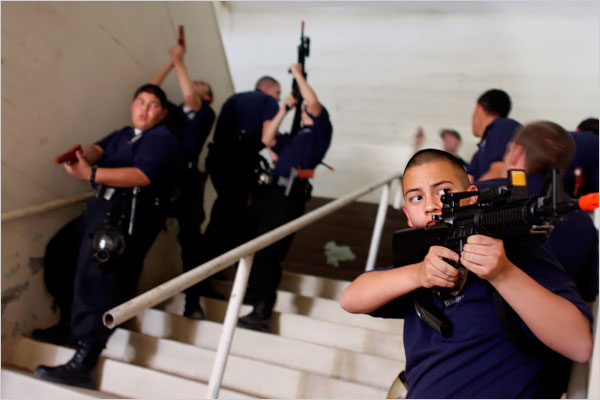 Searching for a terrorist, Explorers with the Visalia Police Department combed a building rigged with tripwire, alarms and "poison" gas. Photo: Todd Krainin for The New York Times

“Before it was more about the basics,” said Johnny Longoria, a Border Patrol agent here. “But now our emphasis is on terrorism, illegal entry, drugs and human smuggling.”

The law enforcement posts are restricted to those ages 14 to 21 who have a C average, but there seems to be some wiggle room. “I will take them at 13 and a half,” Deputy Lowenthal said. “I would rather take a kid than possibly lose a kid.”

The law enforcement programs are highly decentralized, and each post is run in a way that reflects the culture of its sponsoring agency and region. Most have weekly meetings in which the children work on their law-enforcement techniques in preparing for competitions. Weekends are often spent on service projects.

Just as there are soccer moms, there are Explorers dads, who attend the competitions, man the hamburger grill and donate their land for the simulated marijuana field raids. In their training, the would-be law-enforcement officers do not mess around, as revealed at a recent competition on the state fairgrounds here, where a Ferris wheel sat next to the police cars set up for a felony investigation. 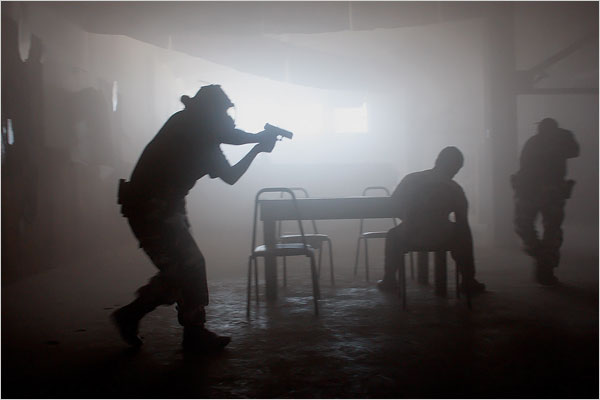 In El Centro, Calif., Explorers portraying Border Patrol agents rushed into a room filled with fake poison gas and aimed their weapons at a man before realizing he was a wounded hostage. Photo: Todd Krainin for The New York Times

Their hearts pounding, Explorers moved down alleys where there were hidden paper targets of people pointing guns, and made split-second decisions about when to shoot. In rescuing hostages from a bus taken over by terrorists, a baby-faced young girl screamed, “Separate your feet!” as she moved to handcuff her suspect.

In a competition in Arizona that he did not oversee, Deputy Lowenthal said, one role-player wore traditional Arab dress. “If we’re looking at 9/11 and what a Middle Eastern terrorist would be like,” he said, “then maybe your role-player would look like that. I don’t know, would you call that politically incorrect?”

Authenticity seems to be the goal. Imperial County, in Southern California, is the poorest in the state, and the local economy revolves largely around the criminal justice system. In addition to the sheriff and local police departments, there are two state prisons and a large Border Patrol and immigration enforcement presence.

“My uncle was a sheriff’s deputy,” said Alexandra Sanchez, 17, who joined the Explorers when she was 13. Alexandra’s police uniform was baggy on her lithe frame, her airsoft gun slung carefully to the side. She wants to be a coroner.

“I like the idea of having law enforcement work with medicine,” she said. “This is a great program for me.”

And then she was off to another bus hijacking. 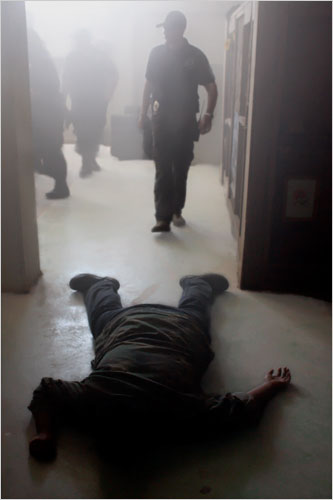 Dave Holletz, of the Brawley, Calif., police department, entered after the Explorers had killed the last hostage-taker. "Forget the injured, forget the dead," Mr. Holletz advised the Explorers. "Accomplish your mission: terminate the shooter." Photo: Todd Krainin for The New York Times

One Response to Scouts Train to Fight Terrorists, and More