Roads to Ruin: Towns Rip Up the Pavement

Asphalt Is Replaced By Cheaper Gravel; ‘Back to Stone Age’

(WSJ)   SPIRITWOOD, N.D.—A hulking yellow machine inched along Old Highway 10 here recently in a summer scene that seemed as normal as the nearby corn swaying in the breeze. But instead of laying a blanket of steaming blacktop, the machine was grinding the asphalt road into bits.

“When [counties] had lots of money, they paved a lot of the roads and tried to make life easier for the people who lived out here,” said Stutsman County Highway Superintendant Mike Zimmerman, sifting the dusty black rubble through his fingers. “Now, it’s catching up to them.” 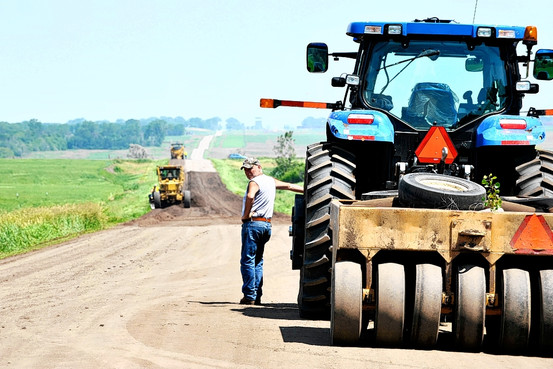 A road crew in Jamestown, N.D., where road repair means reclaiming the original asphalt and processing it to resemble gravel.

Outside this speck of a town, pop. 78, a 10-mile stretch of road had deteriorated to the point that residents reported seeing ducks floating in potholes, Mr. Zimmerman said. As the road wore out, the cost of repaving became too great. Last year, the county spent $400,000 on an RM300 Caterpillar rotary mixer to grind the road up, making it look more like the old homesteader trail it once was.

Paved roads, historical emblems of American achievement, are being torn up across rural America and replaced with gravel or other rough surfaces as counties struggle with tight budgets and dwindling state and federal revenue. State money for local roads was cut in many places amid budget shortfalls.

In Michigan, at least 38 of the 83 counties have converted some asphalt roads to gravel in recent years. Last year, South Dakota turned at least 100 miles of asphalt road surfaces to gravel. Counties in Alabama and Pennsylvania have begun downgrading asphalt roads to cheaper chip-and-seal road, also known as “poor man’s pavement.” Some counties in Ohio are simply letting roads erode to gravel.

The moves have angered some residents because of the choking dust and windshield-cracking stones that gravel roads can kick up, not to mention the jarring “washboard” effect of driving on rutted gravel.

But higher taxes for road maintenance are equally unpopular. In June, Stutsman County residents rejected a measure that would have generated more money for roads by increasing property and sales taxes.

“I’d rather my kids drive on a gravel road than stick them with a big tax bill,” said Bob Baumann, as he sipped a bottle of Coors Light at the Sportsman’s Bar Café and Gas in Spiritwood.

Rebuilding an asphalt road today is particularly expensive because the price of asphalt cement, a petroleum-based material mixed with rocks to make asphalt, has more than doubled over the past 10 years. Gravel becomes a cheaper option once an asphalt road has been neglected for so long that major rehabilitation is necessary.

“A lot of these roads have just deteriorated to the point that they have no other choice than to turn them back to gravel,” says Larry Galehouse, director of the National Center for Pavement Preservation at Michigan State University. Still, “we’re leaving an awful legacy for future generations.”

Some experts caution that gravel roads can be costlier in the long run than consistently maintained asphalt because gravel needs to be graded and smoothed. A gravel road “is not a free road,” says Purdue University’s John Habermann, who organized a recent seminar about the resurgence of gravel roads titled “Back to the Stone Age.”

Paving grew in popularity in the early 20th century as more cars hit streets and spread when the federal government built the Interstate Highway System.

Over the years, many of the two-lane arteries that connect country roads with metro areas have deteriorated under rising traffic and the growing weight of farm combines, logging trucks and other heavy equipment.

Frederick Wachtel, county engineer in Coshocton County, Ohio, says his budget, largely driven by fuel taxes and vehicle registration fees, was off 5% last year, the first decline in nearly 20 years. He is now letting some of his roads return to nature.

In Spiritwood one day recently, a soft breeze carried the scents of cow manure and hot asphalt over the tall broom grass. The giant Caterpillar chugged along at a speed of 2.4 feet per minute and pulverized Old Highway 10 into a black dust with chunks of rock and pavement. A piece of equipment following behind rolled the surface flat.

The machines rumbled along a path carved by homesteaders’ covered wagons in the 1800s. Over time, grain elevators and railroad depots sprung up along the route, which became known as the Old Red Trail. Later, the road was paved and renamed Highway 10.

After Interstate 94 was built alongside the road in the 1950s, it became Old Highway 10. Traffic volumes gradually dropped until Old 10 became a lazy backcountry road dotted with abandoned farmsteads. In the 1960s the state gave Old 10 to the counties it ran through, leaving them to pay for upkeep. North Dakota’s Stutsman County got a 30-mile stretch.

The gift became a burden. The Stutsman highway department, which gets the bulk of its funds from local property taxes, state fuel taxes and vehicle registration fees, let the road fall into disrepair as it juggled other projects. Every year without major maintenance, the road became more expensive to fix.

Judy Graves of Ypsilanti, N.D., voted against the measure to raise taxes for roads. But she says she and others nonetheless wrote to Gov. John Hoeven and asked him to stop Old 10 from being ground up because it still carries traffic to a Cargill Inc. malting plant. She says the county has mismanaged its finances and badly neglected roads.

“Our expenses outweigh the income,” says Mr. Zimmerman, who has been with the county highway department for nearly 30 years. He says the county will pay about $2,600 per mile annually for the newly ground-up road, as against about $75,000 per mile to reconstruct it.

Gayne Gasal, who lives along the redone stretch of road, says it has turned out “better than we all thought.” But Sportsman’s Bar owner Hilda Kuntz worries that the classic cars and bikers that roll through town in the summer will stay away.

“It’s going to kill my business,” she said.

4 Responses to Roads to Ruin: Towns Rip Up the Pavement