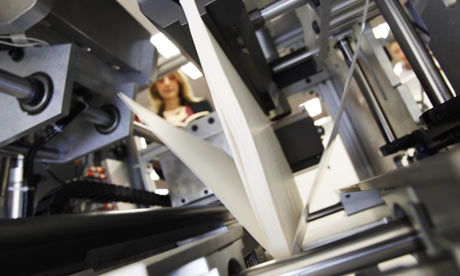 It’s not elegant and it’s not sexy – it looks like a large photocopier – but the Espresso Book Machine is being billed as the biggest change for the literary world since Gutenberg invented the printing press more than 500 years ago and made the mass production of books possible. Launching today at Blackwell’s Charing Cross Road branch in London, the machine prints and binds books on demand in five minutes, while customers wait.

Signalling the end, says Blackwell, to the frustration of being told by a bookseller that a title is out of print, or not in stock, the Espresso offers access to almost half a million books, from a facsimile of Lewis Carroll’s original manuscript for Alice in Wonderland to Mrs Beeton’s Book of Needlework. Blackwell hopes to increase this to over a million titles by the end of the summer – the equivalent of 23.6 miles of shelf space, or over 50 bookshops rolled into one. The majority of these books are currently out-of-copyright works, but Blackwell is working with publishers throughout the UK to increase access to in-copyright writings, and says the response has been overwhelmingly positive.

“This could change bookselling fundamentally,” said Blackwell chief executive Andrew Hutchings. “It’s giving the chance for smaller locations, independent booksellers, to have the opportunity to truly compete with big stock-holding shops and Amazon … I like to think of it as the revitalisation of the local bookshop industry. If you could walk into a local bookshop and have access to one million titles, that’s pretty compelling.”

From academics keen to purchase reproductions of rare manuscripts to wannabe novelists after a copy of their self-published novels, Blackwell believes the Espresso – a Time magazine “invention of the year” – can cater to a wide range of needs, and will be monitoring customer usage closely over the next few months as it looks to pin down pricing (likely to be around the level of traditional books) and demand. It then hopes to roll it out across its 60-store network, with its flagship Oxford branch likely to be an early recipient as well as a host of smaller, campus-based shops.

The brainchild of American publisher Jason Epstein, the Espresso was a star attraction at the London Book Fair this week, where it was on display to interested publishers. Hordes were present to watch it click and whirr into action, printing over 100 pages a minute, clamping them into place, then binding, guillotining and spitting out the (warm as toast) finished article. The quality of the paperback was beyond dispute: the text clear, unsmudged and justified, the paper thick, the jacket smart, if initially a little tacky to the touch.

Described as an “ATM for books” by its US proprietor On Demand Books, Espresso machines have already been established in the US, Canada and Australia, and in the Bibliotheca Alexandrina in Egypt, but the Charing Cross Road machine is the first to be set up in a UK bookstore. It cost Blackwell some $175,000, but the bookseller believes it will make this back in a year. “I do think this is going to change the book business,” said Phill Jamieson, Blackwell head of marketing. “It has the potential to be the biggest change since Gutenberg and we certainly hope it will be. And it’s not just for us – it gives the ability to small independent bookshops to compete with anybody.”