Police State: 14 Of The Most Ridiculous Things That Americans Are Being Arrested For

(PAKALERT PRESS)   Doesn’t it seem like almost everything is becoming a crime in America now?  Americans are being arrested and charged with crimes for doing things like leaving dog poop on the ground, opening up Christmas presents early, not recycling properly, farting in class and having brown lawns.  But is it healthy for our society for the police to be involved in such silly things?  Every single day the United States inches closer to becoming a totalitarian society.  While there are some that would welcome this shift, the truth is that throughout history the societies that have experienced the greatest economic prosperity have all had at least a certain level of freedom.  Business thrives when people feel free to live and work.  When a government tightens the grip too much many people just start shutting down.  Just look at places like North Korea.  Even though the rest of the world is sending them huge amounts of food starvation is still quite common in that totalitarian regime.  That is why it is so disturbing that it seems like almost everything has become a crime in America now.  As we continue to criminalize relatively normal behavior our slide toward becoming a totalitarian state will only accelerate. 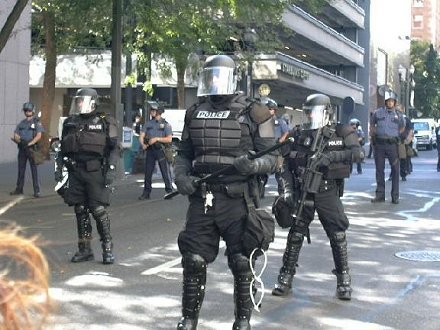 According to the U.S. Bureau of Justice Statistics, as of the end of 2009 a total of 7,225,800 people were either on probation, in prison or on parole in America.

That is a sign of a very, very sick society.  Either we have a massive crime problem or the “control grid” that our leaders have erected for us is wildly out of control.

But how in the world are we supposed to have a healthy economy if our entire nation is being turned into one gigantic prison?

Sadly, it is not just hardcore criminals that are being rounded up and abused by authorities these days.  The following are 14 of the most ridiculous things that Americans are being arrested for….

#1 A Michigan man has been charged with a felony and could face up to 5 years in prison for reading his wife’s email.

#2 A 49-year-old Queens woman had bruises all over her body after she was handcuffed, arrested and brutally beaten by NYPD officers.  So what was her offense?  The officers thought that her little dog had left some poop that she didn’t clean up.

#3 A 56-year-old woman who was once a rape victim refused to let airport security officials feel her breasts so she was thrown to the floor, put in handcuffs and arrested.

#4 In Milwaukee, one man was recently fined $500 for swearing on a public bus.

#5 Several years ago a 12-year-old boy in South Carolina was actually arrested by police for opening up a Christmas present early against his family’s wishes.

#6 In some areas of the country, it is now a crime to not recycle properly.  For example, the city of Cleveland has announced plans to sort through trash cans to ensure that people are actually recycling according to city guidelines.

#7 A 12-year-old girl from Queens was arrested earlier this year and taken out of her school in handcuffs for writing “Lex was here. 2/1/10″ and “I love my friends Abby and Faith” on her desk.

#8 Back in 2008, a 13-year-old boy in Florida was actually arrested by police for farting in class.

#9 The feds recently raided an Amish farmer at 5 AM in the morning because they claimed that he was was engaged in the interstate sale of raw milk in violation of federal law.

#10 A few years ago a 10-year-old girl was arrested and charged with a felony for bringing a small steak knife to school.  It turns out that all she wanted to do was to cut up her lunch so that she could eat it.

#11 On June 18th, two Christians decided that they would peacefully pass out copies of the gospel of John on a public sidewalk outside a public Islamic festival in Dearborn, Michigan and within three minutes 8 policemen surrounded them and placed them under arrest.

#12 A U.S. District Court judge slapped a 5oo dollar fine on Massachusetts fisherman Robert J. Eldridge for untangling a giant whale from his nets and setting it free.  So what was his crime?  Well, according to the court, Eldridge was supposed to call state authorities and wait for them do it.

#13 Once upon a time, a food fight in the cafeteria may have gotten you a detention.  Now it may get you locked up.  About a year ago, 25 students between the ages of 11 and 15 at a school in Chicago were taken into custody by police for being involved in a huge food fight in the school cafeteria.

#14 A few years ago a 70 year old grandmother was actually put in handcuffs and hauled off to jail for having a brown lawn.

Why in the world would anyone approve of the police arresting ordinary Americans for such things?

It seems like ever since 9/11 the whole country has gotten “security fever”.

Suddenly we need to “get tough” on everyone.

Yes, crime is making a comeback, but once upon a time the police in this country were able to handle crime quite well and be courteous and helpful to ordinary citizens at the same time.

But today it seems like nearly every single encounter with police ends up being negative.

It does not have to be that way.

The rest of the world sees what is going on in this country and many of them are deciding that they simply do not want to spend their tourist dollars here anymore.  That is not a good thing for our economy.

As the government continues to get even bigger and exerts even more control over our lives, many of our own people are getting sick of it and are moving abroad.

America used to be the land of the free and the home of the brave.

That is no longer true.

Now we get thrown to the floor, handcuffed, beaten and arrested for things that we did not even know were crimes.

If America continues to move in this direction it is going to ruin our economy, our reputation in the world and our national spirit.

Unfortunately, history has shown us that once a free nation starts to lose that freedom it is hard to reverse that slide.  Perhaps we will be different.  Perhaps the American people will stand up and demand that we restore the principles of liberty and freedom that this country was founded on.

Do you think that will happen?  Feel free to leave a comment with your opinion….

2 Responses to Police State: 14 Of The Most Ridiculous Things That Americans Are Being Arrested For