Police have been accused of attempting to prevent seriously injured protesters being treated at the same hospital as officers hurt during last week’s tuition fees demonstration, igniting claims that one student’s life could have been put at risk. 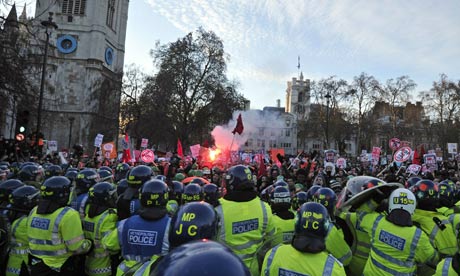 The mother of 20-year-old Alfie Meadows, who required brain surgery after allegedly being hit by a police truncheon, claimed that when her son was taken to Chelsea and Westminster hospital officers objected to him being treated there.

Susan Matthews, 55, said that only the intervention of an ambulance worker allowed her son to receive urgent medical treatment for the stroke he suffered after receiving his injury. “If he hadn’t, Alfie would have been transferred and he could have died,” she said.

After allegedly being hit by police, the philosophy student fell unconscious and later sustained bleeding on the brain.

His mother added: “The ambulance man took us to Chelsea and Westminster hospital. That [hospital] had been given over to police injuries and there was a standoff in the corridor. Alfie was obviously a protester and the police didn’t want him there, but the ambulance man insisted that he stayed.”

She said that he was then asked to take Alfie to another hospital. “The ambulance man was appalled and he said: ‘I’m getting angry now, and I’m not going to do this.’

“The senior nurse in charge took us into a resuscitation room to keep us away from the police because, she said, they were finding it upsetting to see protesters in the hospital.”

The injury to Alfie, a second-year undergraduate at Middlesex University, is already the subject of an investigation by the Independent Police Complaints Commission.

Yesterday afternoon investigators interviewed Alfie at Charing Cross hospital in west London, where he was taken for surgery as his condition began to deteriorate. His mother, an English literature lecturer at Roehampton University, said that her son had made a good recovery after a three-hour operation.

“The first thing Alfie said when he woke up was about how many other people had been hurt and how the police had been striking and bashing everyone. Any one of those kids there could have been Alfie.

“I’m from the generation of Blair Peach [hit over the head by police at a London demonstration in 1979] and we knew that anyone could die if they were hit. He’s amazingly jolly now. I don’t know it that is from a sense of having survived or the morphine.”

A Scotland Yard spokesman said: “The issue is under IPCC investigation.”

Meanwhile, pressure is growing for an inquiry into how the Royal Protection Squad allowed a car containing Prince Charles and his wife Camilla to be attacked by protesters.

Police rejected reports that a communication breakdown led to the Prince of Wales and Duchess of Cornwall being caught up in the protests as they travelled to a theatre in central London.