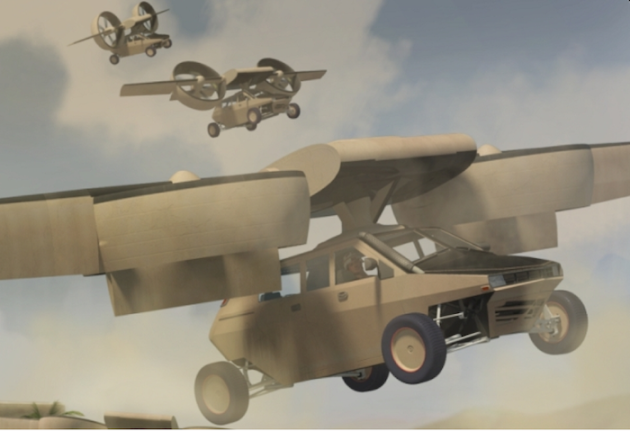 (Liz Goodwin)   The high-tech researchers at the Pentagon’s Defense Advanced Research Projects Agency (DARPA)  say they’re reviewing two “feasible” designs for a flying Humvee vehicle called the “Transformer.” The tank-like machine is supposed to be able to take off and land vertically. The plan is for it to be operated by a person without flight training–or by no one at all, Aviation Week reports. AAI and Lockheed Martin have each submitted potential designs, in tandem with Piasecki Aircraft. AAI’s prototype would weigh 7,500 pounds and combine traditional plane wings with a helicopter rotor on top. Lockheed Martin’s design, above, is 500 pounds lighter. If DARPA chooses one or both of the designs, the companies will submit a prototype Transformer by 2015. The vehicle is supposed to help transport teams avoid improvised explosive devices (IEDs) placed by insurgents on the roads in Iraq and Afghanistan. The vehicle, which will hold up to four men or women, will rapidly shape-shift into an aircraft and hop over potential bombs. But as Wired’s Spencer Ackerman points out, insurgents could always hit the vehicle with a rocket-propelled grenade once it’s gone airborne to shun an IED. The design also seems like a very expensive way to address the problem, Ackerman argues. According to Aviation Week, the Pentagon hopes each device will cost about $1 million to make once the design plans are finalized. That’s more than a tank costs–but much less than the price tag for a helicopter.

One Response to Pentagon mulling ‘feasible’ designs for flying Humvee