One quarter of US grain crops fed to cars – not people, new figures show 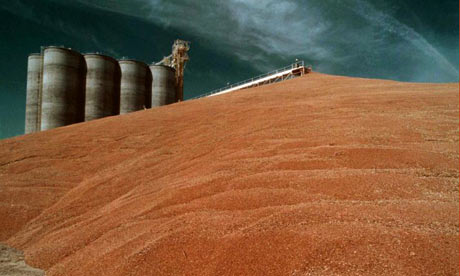 A grain elevator in Illinois. In 2009, 107m tonnes of grain was grown by US farmers to be blended with petrol. Photograph: AP Photo/Monty Davis

(GUARDIAN)    One-quarter of all the maize and other grain crops grown in the US now ends up as biofuel in cars rather than being used to feed people, according to new analysis which suggests that the biofuel revolution launched by former President George Bush in 2007 is impacting on world food supplies.

The 2009 figures from the US Department of Agriculture shows ethanol production rising to record levels driven by farm subsidies and laws which require vehicles to use increasing amounts of biofuels.

“The grain grown to produce fuel in the US [in 2009] was enough to feed 330 million people for one year at average world consumption levels,” said Lester Brown, the director of the Earth Policy Institute, a Washington thinktank ithat conducted the analysis.

Last year 107m tonnes of grain, mostly corn, was grown by US farmers to be blended with petrol. This was nearly twice as much as in 2007, when Bush challenged farmers to increase production by 500% by 2017 to save cut oil imports and reduce carbon emissions.

More than 80 new ethanol plants have been built since then, with more expected by 2015, by which time the US will need to produce a further 5bn gallons of ethanol if it is to meet its renewable fuel standard.

According to Brown, the growing demand for US ethanol derived from grains helped to push world grain prices to record highs between late 2006 and 2008. In 2008, the Guardian revealed a secret World Bank report that concluded that the drive for biofuels by American and European governments had pushed up food prices by 75%, in stark contrast to US claims that prices had risen only 2-3% as a result.

Since then, the number of hungry people in the world has increased to over 1 billion people, according to the UN’s World Food programme.

“Continuing to divert more food to fuel, as is now mandated by the US federal government in its renewable fuel standard, will likely only reinforce the disturbing rise in world hunger. By subsidising the production of ethanol to the tune of some $6bn each year, US taxpayers are in effect subsidising rising food bills at home and around the world,” said Brown.

“The worst economic crisis since the great depression has recently brought food prices down from their peak, but they still remain well above their long-term average levels.”

The US is by far the world’s leading grain exporter, exporting more than Argentina, Australia, Canada, and Russia combined. In 2008, the UN called for a comprehensive review of biofuel production from food crops.

“There is a direct link between biofuels and food prices. The needs of the hungry must come before the needs of cars,” said Meredith Alexander, biofuels campaigner at ActionAid in London. As well as the effect on food, campaigners also argue that many scientists question whether biofuels made from food crops actually save any greenhouse gas emissions.

But ethanol producers deny that their record production means less food. “Continued innovation in ethanol production and agricultural technology means that we don’t have to make a false choice between food and fuel. We can more than meet the demand for food and livestock feed while reducing our dependence on foreign oil through the production of homegrown renewable ethanol,” said Tom Buis, the chief executive of industry group Growth Energy.