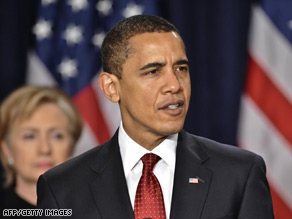 President Obama makes a statement on Afghanistan and Pakistan on Friday at the White House.

Obama reiterated a previous assertion that the U.S. military would pursue extremists within Pakistan’s borders after consulting with the Pakistani government.

The U.S. policy doesn’t change American recognition of Pakistan’s “sovereign government,” Obama said during an appearance on CBS’s “Face the Nation.” But the United States needs to hold that government “more accountable.”

Obama said his administration remains determined to weaken or destroy al Qaeda until it no longer presents a threat to the United States.

He added that his administration is prepared to continually adjust its strategy in Pakistan and Afghanistan as necessary.

On Friday, Obama announced a new plan for the region encompassing Pakistan and Afghanistan. It calls for, among other things, more U.S. troops, greater economic assistance, improved Afghan troop training, and added civilian expertise to defeat the “terrorists who planned and supported the 9/11 attacks.”

“Let me be clear: Al Qaeda and its allies — the terrorists who planned and supported the 9/11 attacks — are in Pakistan and Afghanistan,” he said Friday.

“Multiple intelligence estimates have warned that al Qaeda is actively planning attacks on the U.S. homeland from its safe haven in Pakistan.”

He added that “al Qaeda and its extremist allies are a cancer that risks killing Pakistan from within.”

Obama specifically announced plans to send another 4,000 troops to Afghanistan along with hundreds of civilian specialists, such as agricultural experts, educators and engineers.

The troops — who are in addition to the 17,000 the president announced earlier would be sent to Afghanistan — will be charged with training and building the Afghan army and police force.

Sunday, Obama warned that America’s military commitment to Afghanistan would not be open-ended.

“It’s not going to be an open-ended commitment of infinite resources. We’ve just got to make sure that we are focused on achieving what we need,” Obama said during the CBS interview.

“What I will not do is to simply assume that more troops always results in an improved situation,” the president said.

On Friday, Obama also called for legislation authorizing “$1.5 billion in direct support to the Pakistani people every year over the next five years — resources that will build schools, roads and hospitals and strengthen Pakistan’s democracy.”

The president added that “we will ask our friends and allies to do their part,” including at a donors’ conference in Tokyo, Japan, next month.

He also said the United States would work with the World Bank and the International Monetary Fund and others to help Pakistan get through the economic crisis.