CNN in their article, “Syria: Dozens killed in blasts at Aleppo public square,” bases this conclusion on the discredited “Syrian Observatory for Human Rights,” a single man, Rami Abdelrahman, who is admittedly a biased member of the so-called “Syrian opposition,” based not in Syria but in Coventry England disingenuously posing as an entire “human rights organization.”

But even Abdelrahman’s baseless claims state that “most of the casualties were government forces” meaning that the remaining victims were indeed civilians. Attacking public squares populated with civilians using indiscriminate explosive devices in such attacks is a brazen war crime, one made possible by Western cash, armaments, and political support supplied to sectarian extremist groups starting as far back as 2007.

The city of Aleppo has suffered heavily at the hands of NATO-backed terrorists, entire battalions of which consist of Libyan terrorists, not Syrian “freedom fighters” as the Western media attempts to repeatedly state.

Libyan militants from the listed terror organization, the Libyan Islamic Fighting Group (LIFG), are stationed, armed, and funded in NATO-member Turkey by Western and the Persian Gulf states of Qatar and Saudi Arabia, before crossing into northern Syria to carry out atrocities against the Syrian people under the guise of the so-called “Free Syrian Army.” 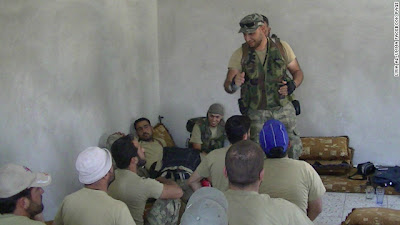 Image: Libyan Mahdi al-Harati of the US State Department, United Nations, and the UK Home Office (page 5, .pdf)-listed terrorist organization, the Libyan Islamic Fighting Group (LIFG), addressing fellow terrorists in Syria. Harati is now commanding a Libyan brigade operating inside of Syria attempting to destroy the Syrian government and subjugate the Syrian population. After ravaging many of Libya’s historical sites out of sectarian spite, these very same terrorists are attacking heritage sites across the ancient northern city of Aleppo, Syria.

As these terrorist battalions continuously fail to achieve any significant military gains against the Syrian Army, they have resorted to brazen terrorist attacks like the recent coordinated car bombings, as well as targeting high profile historical sites across the ancient city. The Western media then attempts to portray the ravaging of Syria’s historical treasures as perpetrated by the Syrian government, when these same Libyan terrorists ravaged their own historical sites in acts of sectarian spite toward the end of last year’s NATO-backed destruction of the Libyan nation-state.

Three United Nations independent experts today strongly condemned the destruction of Sufi religious and historic sites in various parts of Libya, as well as the intimidation and excessive use of force against unarmed protesters opposing the destruction.

According to media reports, ultra-conservative Islamists were responsible for the damage, reportedly with the acquiescence of members of the security forces. The sites are revered by Sufis, a branch of Islam known for its moderation but considered heretical by some branches of the Islamic faith.

These same sectarian extremists are now busy at work in Syria, again, with NATO arms, cash, and both political and covert military support carrying out identical atrocities with the Western press repeating identical lies to obfuscate from the public the true scope of the conflict.