(MIKE ADAMS)   NaturalNews can now confirm that the Michigan Department of Natural Resources has, in total violation of the Fourth Amendment, conducted two armed raids on pig farmers in that state, one in Kalkaska County at Fife Lake and another in Cheboygan County. Staging raids involving six vehicles and ten armed men, DNA conducted unconstitutional, illegal and arguably criminal armed raids on these two farms with the intent of shooting all the farmers’ pigs under a bizarre new “Invasive Species Order” (ISO) that has suddenly declared traditional livestock to be an invasive species. 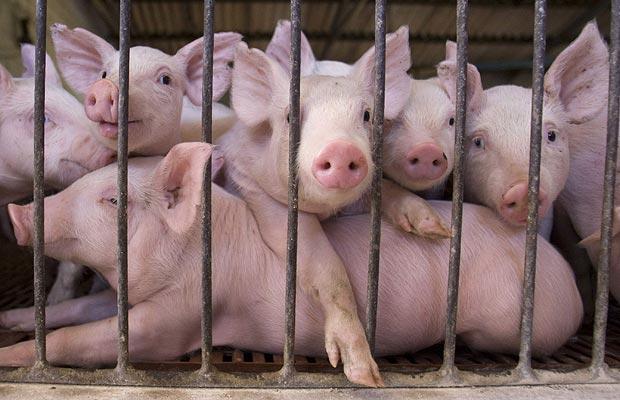 See our previous report on this subject at:

And hear my interview with Mark Baker, who runs one of the farms to be targeted by the Michigan government, at:

The ISO also deems farmers who raise these pigs to be felons, and DNR officials were ready to make arrests on the scene and haul away these farmers to be prosecuted as hardened criminals.

Farmer forced to shoot his own baby piglets in cold blood

“I think this is an unconstitutional order, these actions of the DNR are way out of bounds,” attorney Joseph O’Leary told NaturalNews in an interview today. He is representing one of the farmers who was targeted in these raids. “To take what was six months ago an entirely legal activity, and suddenly people are felons over it. They’re not growing drugs, running guns or killing anybody, they’re raising animals pursuant to USDA regulations and state of Michigan regulations. They haven’t done anything wrong here, and the DNR is treating them like they are hardened criminals.”

In anticipation of the DNR arriving on the scene, one farmer engaged in what can only be described as a heart-wrenching task of shooting his own pigs, one by one, including baby piglets before the DNR arrived. This was to avoid being arrested as a felon. His livelihood is now completely destroyed, as the state of Michigan has put him out of business. Even after this farmer informed the DNR that he had destroyed his entire herd of pigs, the DNR continued to illegally acquire a search warrant by providing false information to a court Judge, then conducting an armed raid on his ranch to verify that the entire herd of pigs had indeed already been shot to death. That this took place satisfied the DNR, which is now showing itself to be engaged in the mob-style destruction of targeted farming businesses through its mass-murder agenda of Michigan’s small-scale farm pigs.

“It was very traumatic for him. These guys are farmers, and I know how much he cared for the animals there, and the DNR treats these like they’re some kind of a plant that needs to be exterminated rather than animals that people care about,” said O’Leary.

One of the raids targeted Ron McKendrick of Renegade Ranch in Cheboygan County. His ranch was raided on Saturday morning, and DNR agents reportedly conducted an interrogation of his customers and his 75-year-old senior citizen employee.

Based on the actions of the DNR, it is my belief that the DNR is a rogue, criminal gang of government thugs who are murdering livestock, destroying the lives of farmers, violating the constitutional rights of Michigan citizens and engaging in outrageous acts of destruction of private property.

As the editor of NaturalNews, I am hereby calling for the armed citizens’ arrest of DNR officials who must be brought to justice for their crimes against Michigan farmers. Every agent of the DNR that participated in these raids must be brought to justice to answer for their crimes. If the use of force is necessary to make a lawful and legal arrest of these criminal Michigan government agents, then such use of force is fully authorized under the United States Constitution as well as the Constitution of the State of Michigan. In Texas, the state Constitution even says that farmers have the right to use lethal force to prevent someone from committing a felony crime against their property. This includes shooting horse thieves, for example, and being in the right to do so.

While I’m not sure if the Michigan constitution provides for such defense of private property, no government has any right to terrorize its citizens in the way that has been witnessed here with the DNR of Michigan. These people are utterly out of control, waging a private armed war against selective targets, using taxpayer money to destroy the lives of productive Michigan citizens. These DNS agents are dangerous and clearly psychologically imbalanced. They desperately need to be taught a lesson in lawful government and the rights of citizens. They need to be arrested and serve time to rethink their crimes against the People of Michigan.

While I do not espouse the use of violence to resolve issues with government, when innocent farmers are faced with being raided by criminal gangs of rogue government operatives who are forcing them to destroy their entire livestock herds, there is little choice but to bring out the rifles and arrest these criminals at gunpoint and bring them to justice in the court system where they must face charges of conspiracy, destruction of private property, the violation of the civil rights of private citizens, illegal trespassing and much more. This is the whole point of the Second Amendment, by the way: To give the People some balance of power so that they might protect themselves against the overzealous, tyrannical agendas of out-of-control governments which inevitably try to rule over the People as violent dictators.

A court hearing is scheduled this Friday at 9:00 am at the courthouse in Cheboygan County. I have been told that a very important legal strategy to halt this DNR madness will be unveiled in the courtroom that morning. Ron McKendrick, whose ranch was raided by DNR over the weekend, will be appearing in this hearing.

I am calling upon all patriots, farmers and food rights activists in Michigan to be there on Friday morning and join in this show of support for farming freedom and fundamental human rights. Do we not have the right to raise livestock without the state raiding our property and murdering our animals? And why is this not being covered in the national media?

Also: This battle continues to be waged by Mark Baker at www.BakersGreenAcres.com who desperately needs additional legal funds to continue his fight against the out-of-control government tyrants in Michigan who are trying to destroy farms. Please check his website for updates and make a small donation (even $5 or $10 helps) using the “Donate” button on his website.

NaturalNews will continue developing this story and we anticipate bringing you more details after the Friday hearing. In the mean time, I will continue to call for an armed citizens’ arrest of DNR officials who are now, by any standard, runaway criminal thugs who are operating under the false cover of government. If anyone has a list of the names of these people, please contact NaturalNews with that list so that we can publish them under a “WANTED FOR CRIMES AGAINST THE PEOPLE” heading as we continue to call for their arrest.

Watch NaturalNews for more breaking news on this front. In the mean time, as a message to Michigan farmers: Yes, they really ARE coming for you. You need to get together and stage a 20-man posse to catch these thugs and arrest them at gunpoint, then haul them into the local Sheriff’s office to face some serious jail time.

One Response to Michigan unleashes armed raids on small pig farmers, forces farmer to shoot all his pigs