Man saws off own foot to continue receiving unemployment benefits 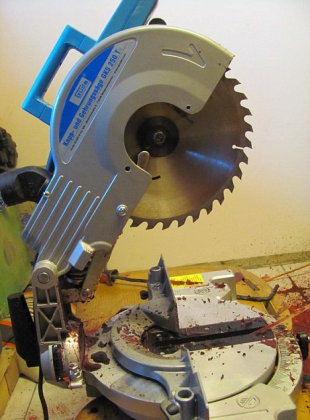 (YAHOO NEWS)   It sounds like the plot of a boring “Saw” film, but it’s apparently all too real.

An unemployed Austrian man cut off his own foot with a mitre saw so he could continue receiving jobless benefits.

Hans Url, a 56-year-old from Mitterlabill, then took the foot and cooked it in the oven so doctors could not reattach it.

“The planning was meticulous,” Franz Fasching, a police spokesman, told the Daily Mail. “[Url] waited until his wife and his adult son had left the house and he was alone. He then switched it on and sliced off his left foot above the ankle—throwing it in the fire so it would not be possible to reattach it before he called emergency services.”

He “then made his way to the garage where he called emergency services and waited for them to arrive.”

Url was airlifted to a hospital in Graz, where he was put in an artificial coma so doctors could stabilize him.

“The foot was too badly burned to reattach,” a hospital spokesman said. “All we could do was seal the wound. He had lost a lot of blood—he almost died on the way to hospital.”

According to the Austrian Times, Url had complained before the incident that he was too sick to work and “didn’t like the work he was offered.”

The kicker: According to the paper, being footless does not necessarily qualify Url for unemployment compensation.

“He will be assessed once he is out of hospital, and we will see what work we can find for him,” Hermann Gössinger, a spokesman for the employment benefits office, said.