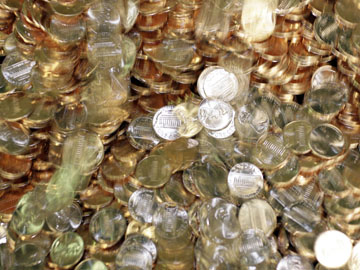 The story, reported in the Salt Lake City Deseret News, describes the “penny offense” this way: West, 38, did not believe he owed the medical clinic $25 but came in to pay the fee in person. He first asked the clinic staff if the facility accepted cash payments, and then dumped 2,500 pennies onto the counter and demanded that they be counted.

But West apparently hadn’t counted on the clinic calling the police; the arresting officer contended that West’s protest served “no legitimate purpose.” The charge carries a fine that can go as high as $140–and there’s no word as yet on what currency West will use to pay it.

West isn’t alone in the ranks of penny protesters. A wise guy in Frederick, Maryland, showed up at the county clerk’s office last summer with bags of cash to pay off his tax bill with $966.86 in change.

And a New Jersey school district a few years back punished 29 students who paid for their $2 school lunches in pennies–possibly as a prank–with two-day detentions. After parents protested, the students were pardoned. The school explained that the use of the small change slowed down the lunch line.

3 Responses to Man fined for paying fee in pennies