(THE INTERCEPT)   The bill would allow anyone who called for an academic, consumer or cultural boycott to be sued for compensation 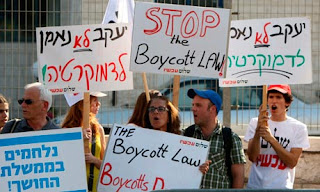 The Israeli parliament is preparing to pass a law that would in effect ban citizens from calling for academic, consumer or cultural boycotts of Israel in a move that has been denounced by its opponents as anti-democratic.

The boycott bill is expected to win majority backing, despite strong opposition and an attempt to filibuster Monday night’s debate. Under its terms, any individual or organisation proposing a boycott could be sued for compensation by any individual or institution claiming that it could be damaged by such a call. Proof of actual damage would not be required.

The bill seeks to protect individuals and institutions in Israel and the Palestinian territory it has occupied, illegally under international law, since 1967. If the law is passed, it would in effect ban calls for consumer boycotts of goods produced in West Bank settlements, or of cultural or academic institutions in settlements. It would also prevent the government doing business with companies that comply with boycotts.

As debate on the bill opened in the Knesset, the Israeli parliament’s legal adviser presented an opinion that parts of the proposed law were “borderline illegal”. “The broad definition of a boycott on the state of Israel is a violation of the core tenet of freedom of political expression and elements in the proposed bill are borderline illegal,” Eyal Yinon said.

Among the bill’s opponents are dozens of Israeli intellectuals, including the celebrated author Amos Oz, who described the proposed law as the “worst of the anti-democratic bills in the Knesset. The bill will turn law-abiding citizens into criminals.”

According to the Association of Civil Rights in Israel, the bill constitutes “a direct violation of freedom of expression”. Its executive director, Hagai El-Ad, said: “The boycott bill represents the current unfortunate crest in a wave of anti-democratic legislation that is gradually drowning Israel’s democratic foundations.”

Saeb Erekat, the Palestinian chief negotiator, said the bill would punish those who “refuse to recognise the illegal situation associated with Israel’s settlement enterprise in occupied Palestinian territory”.
The bill’s sponsor, Ze’ev Elkin of the rightwing Likud party, said Israel had been dealing for years with boycotts by Arab states but the domestic boycott movement was a “travesty”. “If the state of Israel does not protect itself, we will have no moral right to ask our allies for protection from such boycotts.”
Elkin told the pro-settlement news website Arutz Sheva: “I hope the [legislators] will understand that this is a battle between Zionism and the new left.”

There has been a raft of proposals over recent years denounced by opponents as anti-democratic, including the withdrawal of financing for Israeli films deemed to be critical of government policies and attempts to restrict the international funding of campaigning groups.
If the boycott bill becomes law, it is expected to be challenged in court, putting a spotlight on Israel’s 44-year occupation.