(Guardian/UK)   Pollution caused by the bombing of oil pipelines and the type of munitions used in two wars have led to health problems in Barsa, southern Iraq• Greater rates of cancer and birth defects near sites.Depleted uranium among poisons revealed in report. 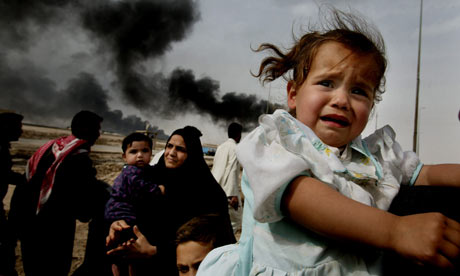 More than 40 sites across Iraq are contaminated with high levels or radiation and dioxins, with three decades of war and neglect having left environmental ruin in large parts of the country, an official Iraqi study has found.

Areas in and near Iraq’s largest towns and cities, including Najaf, Basra and ­Falluja, account for around 25% of the contaminated sites, which appear to coincide with communities that have seen increased rates of cancer and birth defects over the past five years. The joint study by the environment, health and science ministries found that scrap metal yards in and around Baghdad and Basra contain high levels of ionising radiation, which is thought to be a legacy of depleted uranium used in munitions during the first Gulf war and since the 2003 invasion.

The environment minister, Narmin Othman, said high levels of dioxins on agricultural lands in southern Iraq, in particular, were increasingly thought to be a key factor in a general decline in the health of people living in the poorest parts of the country.

Toxic zones in Iraq “If we look at Basra, there are some heavily polluted areas there and there are many factors contributing to it,” ­she told the Guardian. “First, it has been a battlefield for two wars, the Gulf war and the Iran-Iraq war, where many kinds of bombs were used. Also, oil pipelines were bombed and most of the contamination settled in and around Basra.

“The soil has ended up in people’s lungs and has been on food that people have eaten. Dioxins have been very high in those areas. All of this has caused systemic problems on a very large scale for both ecology and overall health.”

Government study groups have recently focused on the war-ravaged city of ­Falluja, west of ­Baghdad, where the unstable security situation had kept scientists away ever since fierce fighting between militants and US forces in 2004.

“We have only found one area so far in Falluja,” Othman said. “But there are other areas that we will try to explore soon with international help.”

The Guardian reported in November claims by local doctors of a massive rise in birth defects in the city, particularly neural tube defects, which afflict the spinal cords and brains of newborns. “We are aware of the reports, but we must be cautious in reaching conclusions about causes,” Othman said. “The general health of the city is not good. There is no sewerage system there and there is a lot of stagnant household waste, creating sickness that is directly affecting genetics. We do know, however, that a lot of depleted uranium was used there.

“We have been regulating and monitoring this and we have been urgently trying to assemble a database. We have had co-operation from the United Nations environment programme and have given our reports in Geneva. We have studied 500 sites for chemicals and depleted uranium. Until now we have found 42 places that have been declared as [high risk] both from uranium and toxins.”

Ten of those areas have been classified by Iraq’s nuclear decommissioning body as having high levels of radiation. They include the sites of three former nuclear reactors at the Tuwaitha facility – once the pride of Saddam ­Hussein’s regime on the south-eastern outskirts of Baghdad – as well as former research centres around the capital that were either bombed or dismantled between the two Gulf wars.

The head of the decommissioning body, Adnan Jarjies, said that when inspectors from the International Atomic Energy Agency arrived to “visit these sites, I tell them that even if we have all the best science in the world to help us, none of them could be considered to be clean before 2020.”

“A big problem for us is when say a tank has been destroyed and then moved, we are finding a clear radiation trail. It takes a while to decontaminate these sites.”

Scrap sites remain a prime concern. Wastelands of rusting cars and war damage dot Baghdad and other cities between the capital and Basra, offering unchecked access to both children and scavengers.

Othman said Iraq’s environmental degradation is being intensified by an acute drought and water shortage across the country that has seen a 70% decrease in the volume of water flowing through the Euphrates and Tigris rivers.

“We can no longer in good conscience call ourselves the land between the rivers,” she said. “A lot of the water we are getting has first been used by Turkey and Syria for power generation. When it reaches us it is poor quality. That water which is used for agriculture is often contaminated. We are in the midst of an unmatched environmental disaster.”