(CNN) — Libyan leader Moammar Gadhafi delivered a lengthy, rambling address Wednesday in his first appearance before the United Nations, slamming both the U.N. Security Council and the United States. He broached conspiracy theories, urged investigations of U.S. military activities and took aim at the structure and the actions of the Security Council, in a one-hour and 36-minute speech at the U.N. General Assembly’s annual session. 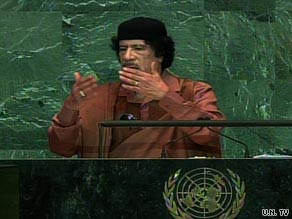 Gadhafi was one of several leaders, including President Obama, addressing the assembly Wednesday.

Gadhafi called for world unity in confronting various world crises, such as climate change and food shortages, but he aimed his ire at the world body and the United States.

Dressed in a traditional Libyan cap and robe, he elaborated on what he believes is the unfairness of the structure of the U.N. Security Council, which has five permanent members: the United States, Russia, China, France and Britain, each with veto power.

“No one is objecting to the preamble [of the U.N. charter], but everything that came after that is contradiction of the preamble,” he said through an interpreter. “The preamble says the nations are equal whether they are small or big. Are we equal in permanent seats? No, we’re not equals.”

Citing the history of colonization and persecution of Africans, Gadhafi said it should be a priority for the United Nations to have a permanent African presence on the Security Council.

He also said that despite the fact that the United Nations says there should be no resorting to military force unless it is a collective decision, 65 wars broke out after the establishment of the United Nations, and the Security Council didn’t do anything to stop the conflicts.

Gadhafi slammed U.S. military actions in places such as Korea, Panama, Vietnam and Grenada. He called the invasion of Iraq “the mother of all evils,” criticizing the hanging of deposed leader Saddam Hussein and the abuses at the Abu Ghraib prison in Iraq.

He also said there should be investigations into many incidents, such as the Afghan war, and that the Taliban should be able to form an Islamic emirate, similar to the Vatican, and not be an enemy.

He called for inquiries of the massacre at the Sabra and Shatila refugee camp in 1982 during the Lebanese civil war, Israel’s Gaza offensive and the killings in the 1960s of former President Kennedy and civil rights leader the Rev. Martin Luther King.

Watch demonstrators for and against Gadhafi »

On other issues, Gadhafi said the solution for Israelis and Palestinians “is a democratic state without religious fanaticism” and said people on both sides want to live in one state. He has put forward an idea called the Isratine proposal that calls for a one-state solution in the region.

Citing tough U.S. security, Gadhafi also broached the idea of moving the U.N. headquarters out of the United States and suggested putting it in another location, like China or India.

He called the H1N1 flu virus a military tool and a weapon of proliferation.

Gadhafi, who spoke after Obama, called the American leader “my son” and congratulated him on his first U.N. General Assembly, but he indirectly criticized Obama for giving a speech and walking out.

In his speech, Obama touted strides he has made since entering office, such as prohibiting torture, and listed four challenges the world should tackle: nuclear nonproliferation, the pursuit of peace, the preservation of the planet and the global economic crisis. He, too, encouraged world unity.

“In this hall, we come from many places, but we share a common future,” he said.

As for the vision of nuclear disarmament, Obama made reference to Iran and North Korea and their nuclear aspirations.

“If they are oblivious to the dangers of escalating nuclear arms races in both East Asia and the Middle East, then they must be held accountable.”

An Israeli official has called on leaders to leave the General Assembly hall when he delivers his address.

“We call on world leaders to leave plenum when Ahmadinejad begins to rant, and not give legitimacy to the most dangerous anti-Semite since Hitler,” Israeli Deputy Foreign Minister Danny Ayalon posted on Twitter.

Seven blocks away from the United Nations, more than 400 protesters — among them people enraged over Iran’s contested presidential election in June — toted anti-Ahmadinejad banners and demonstrated in front of the Iranian U.N. Mission.

“I am very angry,” said Anna Amiri, an Iranian emigree who traveled from Dallas, Texas, to attend the rally.

“We voted for Moussavi to have a change,” she said of Mir Hossein Moussavi, Ahmadinejad’s main opponent in the June election. The results released by Iran said Ahmadinejad won by a wide margin, a conclusion that sparked many street protests and violence.

France’s President Nicolas Sarkozy said the world is on the threshold of an ecological disaster and called on leaders to “invent a new world where the follies of yesterday” cannot be repeated.

“Things cannot go on as before,” he said, adding that change is inevitable. The only question now is whether that change will be in the form of further crises or “the wise path of radical change,” he said.

Sarkozy said the world has waited too long for globalization to be regulated, global warming to be fought and nuclear proliferation to be curbed.

Referring to Iran’s leaders, he said, “If they rely on a passive response from the international community in order to pursue their military nuclear program, they will be making a tragic mistake.”

He called for the Security Council to be expanded to include an African nation, a South American nation, India, Japan and Germany as permanent members.

“The legitimacy of the United Nations depends on this reform,” he said.

He further called for reform of the International Monetary Fund and the World Bank and urged that their mission be redefined in the wake of the world economic crisis. “To maintain the fund as the guardian of a crisis that has shaken our financial paradigm so thoroughly would be a tragedy,” he said.

Sarkozy also called for the elimination of tax havens and for price swings of commodities subject to “excessive speculation,” such as oil, to be curbed.

“The economic, social and human costs of this volatility are unsustainable,” he said.

He called for the body to move quickly, warning that “the threats of worse crises are not behind us, they are ahead of us.”

“We must grasp this next set of challenges immediately,” he said.

In the annual session’s opening address, U.N. Secretary-General Ban Ki-moon urged global leaders to unite and work together to face many of the world’s challenges: “Now is our time. A time to put the ‘united’ back into the United Nations. United in purpose. United in action.”

He focused on the importance of tackling “the threat of catastrophic climate change” and expressed hope that if nations work together to deal with the problem, they will succeed.

He touched on nuclear disarmament, saying, “Let us make this the year we agreed to banish the bomb.”

Ban also talked of the need to fight world poverty, citing what he said is an urgent development: that “near-poor” people are becoming “the new poor.” He cited the possibility that 100 million people “could fall below the poverty line this year.”

Noting the economic crisis around the world, the secretary-general said markets may be bouncing back, but incomes and jobs are not.

“People are angry. They believe the global economy is stacked against them,” he said, mentioning U.N. initiatives to address such economic problems.

He underscored the importance of the International Criminal Court and named trouble spots around the globe that continue to require urgent attention, including Sudan’s Darfur region, Somalia, Sri Lanka, Myanmar, Gaza and Afghanistan.

He also cited “significant progress” in unstable environments such as Timor-Leste, Haiti, Sierra Leone and Nepal. “We see quiet progress in Iraq … and fresh opportunities in Cyprus,” Ban said.