In America, Journalists Are Considered Terrorists

While Government Pretends America Values Freedom of the Press, Real Journalists Are Treated As Terrorists

We’ve previously noted that American journalists are an endangered species (click on the links for stunning details):

If they criticize those in power, they may be smeared by the government and targeted for arrest (and see this).

Indeed, because the core things which reporters do could be considered terrorism, in modern America, they could even targeted under counter-terrorism laws.

And an al-Jazeera journalist was held at Guantánamo for six years, partly in order to be interrogated about the Arabic news network. And see this.

Experts who write about the truth – without any middleman – are also being harassed (and see this).

Wikileaks’ head Julian Assange could face the death penalty for his heinous crime of leaking whistleblower information which make those in power uncomfortable … i.e. being a reporter.

Former attorney general Mukasey said the U.S. should prosecute Assange because it’s “easier” than prosecuting the New York Times. But now Congress is considering a bill which would make even mainstream reporters liable for publishing leaked information (part of an all-out war on whistleblowing).

Do you think that I am being melodramatic and over the top? Think again …

A US air force systems analyst who expressed support for WikiLeaks and accused leaker Bradley Manning triggered a formal military investigation last year to determine whether she herself had leaked any documents to the group.

The investigation was ultimately closed when they could find no evidence of unauthorized leaking, but what makes these documents [Air Force investigative documents, obtained through a Freedom of Information Act request ] noteworthy is the possible crime cited by military officials as the one they were investigating: namely, “Communicating With the Enemy“, under Article 104 of the Uniform Code of Military Justice (UCMJ).

That is one of the most serious crimes a person can commit – it carries the penalty of death – and is committed when a person engages in “unauthorized communication, correspondence, or intercourse with the enemy”. The military investigation form also requires investigators to identify the “victim” of the crime they are investigating, and here, they designated “society” as the victim: 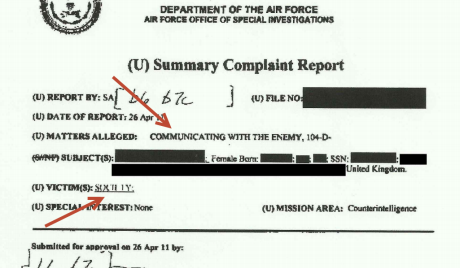 The US government, as part of Obama’s unprecedented war on whistleblowers, has now fully embraced the pernicious theory that any leaks of classified information can constitute the crime of “aiding the enemy” or “communicating with the enemy” by virtue of the fact that, indirectly, “the enemy” will – like everyone else in the world – ultimately learn of what is disclosed.

It seems clear that the US military now deems any leaks of classified information to constitute the capital offense of “aiding the enemy” or “communicating with the enemy” even if no information is passed directly to the “enemy” and there is no intent to aid or communicate with them. Merely informing the public about classified government activities now constitutes this capital crime because it “indirectly” informs the enemy.

If someone can be charged with “aiding” or “communicating with the enemy” by virtue of leaking to WikiLeaks, then why wouldn’t that same crime be committed by someone leaking classified information to any outlet: the New York Times, the Guardian, ABC News or anyone else?

International Law Professor Kevin Jon Heller made a similar point when the charges against Manning were first revealed:

It is always worth underscoring that the New York Times has published far more government secrets than WikiLeaks ever has, and more importantly, has published far more sensitive secrets than WikiLeaks has (unlike WikiLeaks, which has never published anything that was designated “Top Secret”, the New York Times has repeatedly done so: the Pentagon Papers, the Bush NSA wiretapping program, the SWIFT banking surveillance system, and the cyberwarfare program aimed at Iran were all “Top Secret” when the newspaper revealed them, as was the network of CIA secret prisons exposed by the Washington Post). There is simply no way to convert basic leaks to WikiLeaks into capital offenses – as the Obama administration is plainly doing – without sweeping up all leaks into that attack.

The same [Obama] administration that has prosecuted whistleblowers under espionage charges that threatened to send them to prison for life without any evidence of harm to national security, and has brought double the number of such prosecutions as all prior administrations combined. Converting all leaks into capital offenses would be perfectly consistent with the unprecedented secrecy fixation on the part of the Most Transparent Administration Ever™.

The irony from these developments is glaring. The real “enemies” of American “society” are not those who seek to inform the American people about the bad acts engaged in by their government in secret. As Democrats once recognized prior to the age of Obama – in the age of Daniel Ellsberg – people who do that are more aptly referred to as “heroes”. The actual “enemies” are those who abuse secrecy powers to conceal government actions and to threaten with life imprisonment or even execution those who blow the whistle on high-level wrongdoing.

And – after Pulitzer Prize winning journalist Chris Hedges, journalist Naomi Wolf, Pentagon Papers whistleblower Daniel Ellsberg and others sued the government to enjoin the NDAA’s allowance of the indefinite detention of Americans – the judge asked the government attorneys 5 times whether journalists like Hedges could be indefinitely detained simply for interviewing and then writing about bad guys.

The government refused to promise that journalists like Hedges won’t be thrown in a dungeon for the rest of their lives without any right to talk to a judge. Indeed, Hedges believes that the government has already detained American citizens under the NDAA.

I have discussed the terms of the Homeland Battlefield Bill – also known as the National Defense Authorization Act – with numerous other journalists, writers, and members of democracy-supporting organizations across the political spectrum, from the Bill of Rights Defense Committee to the Tenth Amendment Center. I have also discussed the bill with various political leaders, including city council members and legislators, who span the political spectrum in the United States. They all agree that the bill can potentially affect an American journalist who meets with and publishes reports on individuals connected to organizations deemed terrorist by the United States government.

Wolf notes that the NDAA has already had a drastic chilling effect, interfering with her ability to be a journalist:

I declined, in writing, a proposed meeting with … Julian Assange, because of statements made by high-level United States officials regarding their belief that Assange is a terrorist …. I have declined to meet directly with members of Occupy Wall Street, because that group is being threatened with being named as terrorists in Miami. As a result, I have ceased conducting one-on-one interviews with them.

I have declined, in writing, to follow up with a proposed meeting with a support group in London that serves former prisoners, released without charge by the US government from the US detention center at Guantánamo Bay. Because some of these prisoners were released without government determination of whether they were connected to a terrorist organization, I declined to meet with this group for fear that this story could conceivably be considered some form of support to a group affiliated with terrorists.

I declined, in writing, to give additional media attention to a reporter who produced a documentary based on the bombardment of Gaza, and its effect on the Palestinian civilian population. Since I did not know who else, or which other entities, may have contributed to its production, I was concerned that my shining a media spotlight on the film, and gathering other members of the press to see it, might lead to wider attention and further fundraising that could conceivably fall under the term “material support”.

Thus the Homeland Battlefield Bill has already a chilling effect upon my ability to investigate and document matters of national controversy that would ordinarily be subject to my professional inquiry. It has therefore prevented my readers from receiving the full spectrum of truthful reporting which, in a functioning democracy, they have a right to expect.

Obviously, spokesmen for the government who never criticize in more than a superficial fashion are protected and rewarded.

Postscript: Hedges, Ellsberg and Wolf won their trial. Specifically, a federal court judge granted their request to stop the application of the NDAA to Americans. The government has appealed, and it will be a tough fight. Everyone who values a free press may wish to consider supporting their effort.