(WSJ)  —  Landmark legislation to curb U.S. greenhouse-gas emissions was approved by the House of Representatives in a close vote late Friday, securing an initial victory for a cornerstone of President Barack Obama’s agenda.

After months of negotiations, the Democratic-controlled House has narrowly passed sweeping legislation calling for the nation’s first-ever limits on pollution linked to global warming. Stephen Power explains the bill’s implications.

The 1,200 page bill — formally known as the “American Clean Energy and Security Act” — will reach into almost every corner of the U.S. economy. By putting a price on emissions of greenhouse gases, such as carbon dioxide, the bill would affect the way electricity is generated, how homes and offices are designed, how foreign trade is conducted and how much Americans pay to drive cars or to heat their homes.

The House climate bill, approved by a 219-212 vote Friday evening, would mandate that 15% of the nation’s electricity come from renewable sources such as wind and solar power by 2020, potentially expanding the market and profit potential for companies in those sectors. Towards that goal, it seeks to boost nascent industries such as wind-generated electricity and solar power.

But it isn’t clear how much of the sprawling House bill will survive in the Senate, where moderate Democrats and Republicans could form a majority that backs less ambitious action. Among the potential problem areas: the House bill has a provision that would impose tariffs on goods imported from countries that don’t match U.S. carbon dioxide restrictions — a slap at China and India that some business interests fear could provoke a trade war.

Business factions split on the measure. The Edison Electric Institute, which represents investor-owned utilities, backs it. Other companies — particularly those with big investments in alternatives to fossil fuels — praised the vote. “The House has taken an important first step on a road that will help the industry scale to a point at which we no longer need government incentives,” said Bryan Ashley, vice president of Suniva, Inc., a Georgia-based solar cell manufacturer.

The U.S. Chamber of Commerce and the National Association of Manufacturers lobbied against passage. Groups that represent airlines, oil producers and mining companies expressed disappointment, saying the bill, if enacted, would lead to onerous new costs to consumers. “It will affect every aspect of the American economy, harming our ability to compete in the world and provide secure and affordable energy to American consumers and businesses,” the National Mining Association said in a statement.

Mr. Obama and House leaders struggled to win over a large group of rank-and-file Democrats who expressed doubts about the climate bill. The president lobbied hard personally and through top aides to secure votes from wavering members over the past several days. But in the end, 44 Democrats defected, joining 168 Republicans in opposition. Eight Republicans crossed party lines to support the bill.

Mr. Obama and other top Democrats insisted the measure will spur job-creating investments in “green” technologies, while lessening U.S. reliance on foreign oil. They said the fear that higher energy costs will result is overblown, in part because savings from energy-efficiency investments could offset most or all of the costs to consumers. 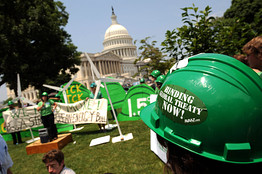 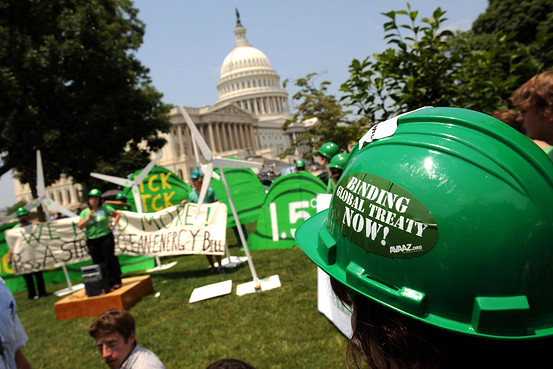 “We cannot be afraid of the future. And we must not be prisoners of the past,” Mr. Obama said in his regular Saturday radio address. “Don’t believe the misinformation out there that suggests there is somehow a contradiction between investing in clean energy and economic growth.”

The nonpartisan Congressional Budget Office has estimated the bill would have a modest impact on family budgets. The CBO projected an annual economy-wide cost in 2020 of $22 billion, or about $175 per household. The CBO’s study didn’t consider the broader effect of the legislation on employment or gross domestic product.

Republicans argued that the CBO’s estimate lowballs the actual cost of the bill for families. They contended the measure amounted to a job-killing tax on consumers and businesses. “The Waxman-Markey bill promises to destroy our standard of living,” said Rep. Frank Lucas (R., Okla.).

House Minority Leader John Boehner lambasted the Democratic bill for more than an hour Friday evening before the final vote. He mocked provisions covering everything from energy-efficient loan standards for Fannie Mae and Freddie Mac to the definition of “renewable biomass” to the establishment of “green” banking centers. “Is there anything we’re not regulating in this bill?” he said.

Speaker Nancy Pelosi (D., Calif.) followed Mr. Boehner to close debate, but spoke only briefly to urge passage. “Just remember these four words: Jobs, jobs, jobs and jobs,” she said, reinforcing her party’s portrayal of the bill as good for the economy.

The big-money piece of the bill is a proposal to require companies to buy permits to emit carbon dioxide and other greenhouse gases that scientists have linked to changes in the earth’s climate, causing such phenomena as melting polar ice caps. The bill would put caps on those emissions, with the goal of reducing overall U.S. greenhouse gas emissions by 17% from 2005 levels by the year 2020, and 83% by mid-century.

In a series of deals meant to ease the impact on businesses and their customers, Democratic leaders agreed to give away to the business community more than 60% of pollution permits in the early years of the program.

Supporters say the bill will have a modest impact on electricity ratepayers, and in many cases will save them money. That is because the legislation directs state regulators to make sure electricity-producing utilities that receive free pollution permits pass along the savings.

The measure could result in higher gasoline and diesel prices. But New Energy Finance, an energy consultant, said it expects gasoline prices to rise about 17 cents a gallon, a relatively small amount compared with recent fluctuations in pump prices.

The legislation also would let companies avoid cutting their own emissions by purchasing “offsets” — activities such as protecting rainforests in Brazil — that are deemed climate-friendly.

—Russell Gold contributed to this article.

Write to Greg Hitt at greg.hitt@wsj.com and Stephen Power at stephen.power@wsj.com