Hero cop, who sat next to the first lady, charged with rape

(CNN)   A former “top cop,” who sat next to first lady Michelle Obama during a televised presidential speech four years ago, is facing rape allegations.

Richard DeCoatsworth left a party with two women on Thursday, according to authorities.

The women called authorities and said once they arrived at a second, undisclosed location, the retired officer pulled a gun on them, the Philadelphia Police Department said in a statement.

He allegedly forced them “to engage in the use of narcotics and to engage in sexual acts,” the statement said. He was charged with rape on Saturday.

DeCoatsworth became a hero in 2007, after an assailant shot him in the face with a shotgun, according to a White House statement preceding President Barack Obama’s 2009 speech to Congress.

Then a rookie on the Philadelphia police force, DeCoatsworth had followed a group of men in a car, whose activities he found suspicious. They parked and three men got out of the vehicle.

As he followed them on foot, a fourth man emerged from the car and fired a blast from a shotgun at DeCoatsworth’s face. He briefly lost his eyesight.

“But when his vision returned, he was still standing. Bleeding from the face, DeCoatsworth chased the perpetrator on foot for nearly two blocks. The officer returned fire and put out flash information on the subject during the pursuit, before he finally collapsed,” the White House statement said.

More officers arrived, and the assailant was captured.

The Philadelphia Police Department rewarded DeCoatsworth for his valor, promoting him to an elite highway patrol unit. He received the “Top Cops” award in 2008 from the National Association of Police Organizations. 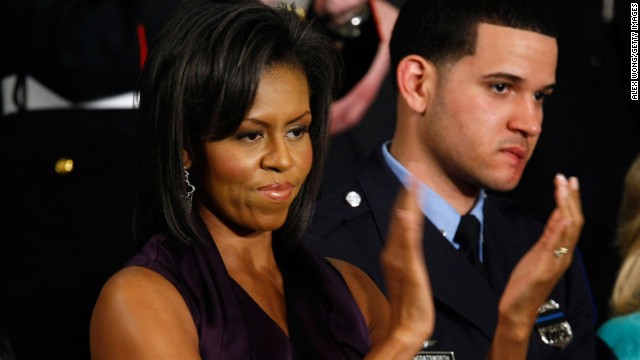 In February 2009, dressed in a ceremonial uniform, he took a seat of honor next to Michelle Obama for the president’s address before a Joint Session of Congress.

But two years later, the officer’s meteoric career took a dive, when he was accused of using excessive force, shooting a motorcyclist in the leg, CNN affiliate KYW reported.

Last year, the City of Philadelphia granted him a disability pension, according to a city government protocol. But a neighbor also took him to court, claiming DeCoatsworth had threatened him.

Along with rape, the former hero faces accusations of “sex assault, terrorist threats and other related charges,” according to police.

KYW reported his bail at $60 million.