(REFRESHING NEWS 99)   A Lutheran charity group has sent about eight golden retrievers to comfort the survivors of Friday’s mass shooting at Sandy Hook Elementary School in Newtown, Conn. Lutheran Church Charities in Addison, Ill., sent the dogs on an 800-mile journey to respond to the disaster. 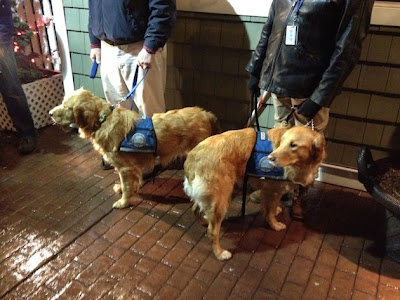 Lutheran Church Charities President Tim Hetzner told the Chicago Tribune that the dogs “are nonjudgmental. They are loving. They are accepting of anyone.”
The dogs have traveled around the country to comfort people after disasters. “The dogs have become the bridge,” Lynn Buhrke, 66, who is a handler for a female golden retriever name Chewie, told the Associated Press. “People just sit down and talk to you.”
The dogs’ first stop on Sunday was Christ the King Lutheran Church, where funerals were held for two children killed in the shootings, Hetzner told the AP. “You could tell which ones … were really struggling with their grief because they were quiet. They would pet the dog, and they would just be quiet.”
The comfort-dog initiative started in 2008 at Northern Illinois University after a gunman killed five students. A group of dog caretakers associated with Lutheran Church Charities went to provide a distraction for the student community. The initiative has grown from a handful of dogs in the Chicago area to 60 dogs in six different states, Hetzner said. The LCC website notes that the eight dogs serving in Newtown are Abbi, Barnabas, Chewie, Hannah, Luther, Prince, Ruthie, and Shami.
http://refreshingnews99.blogspot.in/2012/12/golden-retrievers-sent-to-comfort.html
Tweet