Germany to ban paintball after massacre 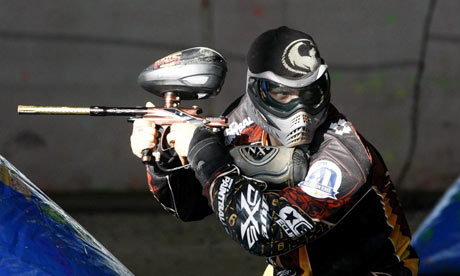 A member of a paintball team training in Berlin. Photograph: Fabrizio Bensch/Reuters

(GUARDIAN)   The German government is planning to ban paintball and laser shooting games in reaction to the recent school massacre in which 15 people died.

Under legislation agreed by the ruling coalition of the chancellor, Angela Merkel, using air rifles to shoot paint-filled pellets at opponents is likely to be made illegal, and would be punishable with fines of up to €5,000 (£4,480).

The decision, which is expected to be fast-tracked through the Bundestag before the summer recess, comes two months after 17-year-old Tim Kretschmar shot dead 15 people at his former school in Winnenden, south-west Germany, with a weapon he had taken from his father’s bedroom. Kretschmar’s love of paintball as well as violent video and computer games was widely publicised.

The government has found itself under pressure to tighten gun laws in Germany in what has become one of the main issues before a general election in September.

“This so-called game plays down violence, leading to the danger that people have fewer inhibitions about shooting each other,” said Dieter Wiefelsputz, of the Social Democrats.

Owners of paintball arenas, which are already out of bounds for under-18s, said they felt they were easy targets in what opposition politicians have referred to as “populistic placebo politics”.

Arne Petry, spokesman for the German Paintball League, said: “Paintball is not about simulating bloodbaths – the most you’re going to end up with is a bruise or two.”

The owner of one of Germany’s largest paintball halls, north-west of Berlin, said he thought the ban ironic, not least because “many of my customers are government workers”. He said he counted bank managers, firefighters, police and even security guards from Merkel’s chancellery among his regular customers.

“They come here after their shifts to let off steam and stay for several hours at a time,” he said, requesting anonymity.

The new law is also expected to forbid under-18s access to high-calibre guns and to make it easier for police to carry out random controls at the homes of registered gun owners.

Claudia Roth, head of the Green party, said that while she was no fan of paintball, the government’s plan to ban it was hypocritical and amounted to a “cowardly concession to the gun lobby”.

“They should instead be banning high-calibre weapons,” she said.

One Response to Germany to ban paintball after massacre