(Red Ice Creations)   War correspondent Michael Ware worked for CNN from 2006 until April of this year, during which time he became known for covering the hellscape of our wars in Iraq and Afghanistan with brutal honesty and a keen analytical sense that often cut against the standard talking points. He’s since been struggling with post-traumatic stress disorder and today the Brisbane Times is reporting on an event that might have contributed to that — an alleged 2007 war crime that CNN refused to air.

Kate Dennehy, who reports that Ware is “set to reveal” the details, describes the incident:

Mr Ware tells of the alleged incident he says he witnessed and filmed in 2007 when working for US news giant CNN, but claims the network decided the footage was too graphic to go to air.

He alleges that a teenager in a remote Iraqi village run by the militant Islamist group, al-Qaeda was carrying a weapon to protect himself.

“(The boy) approached the house we were in and the (US) soldiers who were watching our backs, one of them put a bullet right in the back of his head. Unfortunately it didn’t kill him,” he tells Australian Story.

“We all spent the next 20 minutes listening to his tortured breath as he died.”

Ware goes on to describe his mental state during that time, in which he realized that he was “more concerned with the composition” of his photo than he was with intervening in some way. “I indeed had been indifferent as the soldiers around me whose indifference I was attempting to capture,” Ware says.

In 2008, Ware gave an interview with Men’s Journal’s Greg Veis, that hinted at his mental anguish.

It’s October, six months after our first meeting, and Michael Ware, 39, is at his girlfriend’s apartment in New York, trying to tell me why after six years he absolutely must start spending less time in Iraq. He’s crying on the other end of the telephone.

“Will I get any better?” he continues. “I honestly don’t know. I can’t see the — right now, I know no other way to live.”

Ware also attested to his desire to expose more people to the horrors of war:

He dreams of renting out a theater and subjecting an audience to it in full surround sound; that way people would know what it’s really like over there. “It’s my firm belief that we need to constantly jar the sensitivities of the people back home,” he says. “War is a jarring experience. Your kids are living it out, and you’ve inflicted it upon 20-odd million Iraqis. And when your brothers and sons and mates from the football team come home, and they ain’t quite the same, you have an obligation to sit for three and a half minutes and share something of what it’s like to be there.” 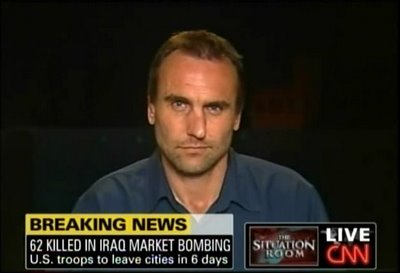 Back in 2006, CNN caught hell from Iraq war proponents after it ran Ware’s video report on insurgent snipers targeting U.S. troops in Iraq. Criticism followed hard from viewers and from lawmakers, most notably Representative Duncan Hunter (R-Calif.), who accused CNN of serving “as the publicist for an enemy propaganda film featuring the killing of an American soldier.”

“Does CNN want America to win this thing?” Hunter asked, “You can’t be on both sides of the war.” An incensed Hunter then asked then-Secretary of Defense Donald Rumsfeld “to remove CNN from the military embedding program.”

Whether or not that incident contributed to CNN’s decision to not air the footage Ware is now describing, it is at the very least, context worth remembering. CNN is said to own Ware’s footage of the incident he describes today in the Brisbane Times.

We have reached out to CNN for comment and will update as soon as they reply.

UPDATE: A CNN spokesperson tells the Huffington Post, “CNN often has to make calls about which disturbing images are necessary to tell a story, and which are too graphic. These are always challenging, and the subject of reasoned editorial debate. On this occasion we decided to not show an Iraqi insurgent dying with fatal wounds.”