(MAC SLAVO)   There was once a group of men who established a fundamental law of the land that allowed the people of their new found country to peaceably assemble and petition their government for a redress of grievances. These founding fathers of that Great nation even went so far as to declare that the government itself could never make a law that would threaten to supplant these protections, which were reserved exclusively for the people. This concept of freedom of assembly and protest was so critical to protecting and preserving the liberty of the people that it was the very first law – the very first Amendment – proposed by the newly elected representatives of These United States of America and came into effect on December 15, 1791. 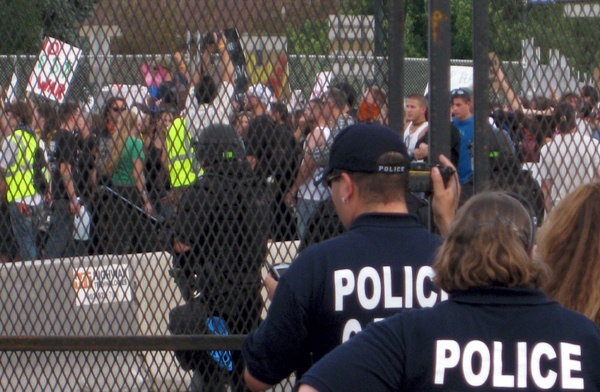 It’s frightening what just a couple of hundred years of politicking, self serving greed and expediency can do to a nation. Apparently, somewhere along the way, politicians and judges who hold their personal views in higher regard than those laws upon which this nation was founded, have taken it upon themselves to decide what’s best for the American people and that, perhaps, we have a little too much liberty:

A federal appeals court has upheld the creation of no demonstration zones, which prohibit free speech in certain public areas.

The Second Circuit Court of Appeals released a ruling yesterday upholding a lower court’s decision that also declared such zones as being permissible. The opinion was penned by Judge Dennis Jacobs on behalf of a three judge panel that included Judges Pierre Leval and Debra Ann Livingston, two of whom are Republican judges appointed by George H.W. Bush.

The case surrounded an arrest that took place in 2004 when Michael Marcavage of Repent America and Steve Lefemine of Columbia Christians for Life attended the Republican National Convention in Madison Square Garden to address the large number of pro-abortion speakers at the event, including Rudy Giuliani and Arnold Schwarzenegger.

According to court records, the two were standing on the public sidewalk holding signs when they were approached by police. The police officer informed the men that they could not stand in their particular location because it had been marked by officials as being a “no demonstration” zone.

When the men asked where they could go to engage in free speech activity,the officer directed them to a free speech zone located a block awayfrom the entrance of Madison Square Garden. The area, which police had specifically erected for demonstrations, was the only location where expressive activity was allowed to take place during the event. Individuals of varying and opposite opinions were forced to stand together in one consolidated and caged area, which included a stage with a microphone.

Marcavage and Lefemine complied by walking away from the area alongside the officers and toward the zone that the NYPD had established. As they walked and were questioning the police about the purpose and reasoning behind the zones, they were placed under arrest for not relocating to the area fast enough.

“They took us to an abandoned warehouse where they funneled hundreds of people into cages that they had set up for this purpose,” Marcavage explained. “They treated us like cattle.”

Only those who agree with the message being delivered at a particular political or public event are now authorized to assemble in or around these areas. Anyone else is relegated to the cattle cages out of view of the public, the media and the officials at whom their protest or grievance is directed.

These zones are the very antithesis of free speech.

And it’s not just judges ruling by decree that are stripping us of our right to assemble and protest. In fact, the 1st Amendment itself has been, per recent Congressional action, overridden by a new law that was passed earlier this year. The Federal Restricted Buildings and Grounds Improvement Act now allows national and local authorities to declare any venue they so choose as an “event of national significance,” at which point anyone who is found to be demonstrating in those areas can be charged under Federal criminal statutes.

The new legislation allows prosecutors to charge anyone who enters a building without permission or with the intent to disrupt a government function with a federal offense if Secret Service is on the scene.

It’s not just the president who would be spared from protesters, either.

Covered under the bill is any person protected by the Secret Service. Although such protection isn’t extended to just everybody, making it a federal offense to even accidently disrupt an event attended by a person with such status essentially crushes whatever currently remains of the right to assemble and peacefully protest.

In the text of the act, the law is allowed to be used against anyone who knowingly enters or remains in a restricted building or grounds without lawful authority to do so…

Under that verbiage, that means a peaceful protest outside a candidate’s concession speech would be a federal offense…

With the definitions for “domestic terrorism” now taking on a broad scope and encompassing almost any activity deemed as such by the Department of Homeland Security and federal authorities, it is only a matter of time before peaceful demonstrators are not only detained for their criminal terroristic activities, but held indefinitely under US anti-terrorism laws like the National Defense Authorization Act.

That members of our Congress and appointed Federal judges would first create, then uphold, such laws designed to explicitly enact regulations in direct and overt violation of the First Amendment of the Bill of Rights is nothing short of a treasonous action.

It is, by all accounts, a betrayal of the people of this country and of the established laws of the land.