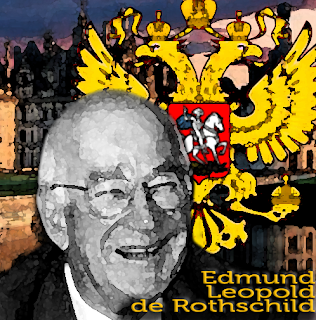 (American Kabuki)   I am not sure why this took so long to get into the major papers considering he died on April 19th, 2012, and he was such a prominent figure but here’s what I’ve found so far.

Most of the obituaries are making him out as a musical philanthropic and miniature train enthusiast. They say very little about his banking activities in Latin America and his funding deep involvement in the CO2 caused Global Warming scam.

The only really good photo I could find was one with him in a train engineers hat, so I created his composite above.  He was involved in far more than orchestras, choirs, and miniture scale railroading. He appears to have never married.

“Leopold de Rothschild, who has died aged 84, was a member of the Rothschild banking family and had a distinguished career in finance; his greatest passions, however, were classical music and steam trains, and he was well known as a leading musical philanthropist.”
http://www.telegraph.co.uk/news/obituaries/finance-obituaries/9241866/Leopold-de-Rothschild.html

“After leaving Cambridge and brief training at other banks, Leo joined his family’s bank, NM Rothschild & Sons, becoming a partner in 1956 and in 1970, when NMR became the last London accepting house to relinquish its private partnership status, an executive director. From 1970 to 1983 he sat as a director on the Court of the Bank of England, like his great-uncle Alfred before him.

Leo de Rothschild was heavily involved in establishing or re-establishing Rothschild’s Latin American offices, especially Mexico, Brazil – where he was responsible for leading the financing for the Rio-Niteroi bridge – and Chile, a country he particularly loved, forming close links with the Matte family.

He played an integral part in the development of the Banking Division and established Rothschild Intercontinental Bank in 1969, bringing together the Rothschild houses and a number of continental firms with historical links to Rothschild.”
http://www.smh.com.au/national/obituaries/banking-heir-doubled-as-musical-benefactor-20120503-1y19q.html

“Born in 1927, Leopold de Rothschild, CBE was educated at Bishop’s College School (Canada), Harrow School, and then Trinity College, Cambridge. His career has seen him in many prestigious roles, beginning with his position as Partner of N.M.Rothschild & Sons Limited in 1956. He became Executive Director upon incorporation in 1970, focusing principally on overseas involvement with Latin America.

Mr. de Rothschild became Director of the National Provincial Bank (later National Westminster Bank [NATWEST]) from 1963 until 1970, and Director of the Bank of England from 1970 to 1983. Between 1982 and 1995, Mr. de Rothschild was a Director of Sun Alliance and London Insurance PLC and he also founded and chaired the Anglo Venezuelan Society from 1975 and 1982, of which he is currently Vice-President.
http://www.wqxr.org/#!/people/leopold-de-rothschild/

Edmund Leopold de Rothschild banker for Global Warming Scam
“After Edmund [Leopold] de Rothschild’s statement, without basis, at the 4th World Wilderness Congress in 1987, that CO2 is the cause of a non-existent global warming – and that combating it needs money (our money), he founded the World Conservation Bank for this reason. In 1991 its name was changed to The Global Environment  Facility (GEF).

The purpose of this facility is to lend money to the poorest countries, printed by the IMF out of thin air, and with the guarantee of our governments. The facility takes wilderness areas with mineral riches as security. The GEF money is then to flow back to our governments as reimbursement for paid loans. I.e. We give away our tax money. For what?

When a country cannot repay loans to the GEF it must give up a piece of its territory to the Rothschild banks (GEF, IMF, World Bank) – up to 30% of the Earth are meant. If land cannot be offered as collateral the country must starve (Haiti, Argentina and others).

Rothschild´s  stroke of genius was that he had his GEF smuggled into the UN system at the Rio UN Summit in 1992 by his friend, Maurice Strong. So now high-ranking ministerial officials from 179 countries are in the the council of the bank – blessing Rothschild grabbing the world!”
http://soldierforliberty.wordpress.com/2010/05/16/the-maurice-strong-rothschild-connection-beyond-the-co2-scam-and-into-control-of-land-and-food/

Banco Bice S.A offers traditional financial services in Chile. It also specializes in foreign trade, financing of investment projects, and provision of advisory services in the field of corporate investments. In addition, the company offers hypothecating financings and services, and leasing and brokerage of nonprevisual insurances. Banco Bice was founded in 1979.
http://investing.businessweek.com/research/stocks/private/snapshot.asp?privcapId=875783

Former Director SunTrust Banks, Inc. (2003-2012)
Member of the European Advisory Council for N.M. Rothschild & Sons Limited
Member of the Board of Governors of Thunderbird School of Global Management
The Garvin School of International Management in Arizona

Mr De Rothschild was a partner, N.M. Rothschild and Sons, &c. He was appointed CBE in 1985.