(WSJ)   A new federal credit-card law that takes effect Monday could erase billions of dollars a year in fees and interest charges paid by consumers. But card issuers are already deploying new tactics that could prove costly for even the most cautious cardholder.

The law made some important changes. Card companies must now tell customers how long it would take to pay off the balance if they only make the minimum monthly payment. Customers can only exceed their credit limit if they agree ahead of time to pay a penalty fee. And unless a cardholder misses payments for more than 60 days, interest-rate increases will affect only new purchases, not existing balances.

Banning these and other profitable tactics is expected to cost the card industry at least $12 billion a year in lost revenue, according to law firm Morrison & Foerster. This has sent the industry scrambling to find new sources of revenue. So get ready for higher annual fees, higher balance-transfer charges, and growing charges for overseas transactions.

“There are countless fees that can be introduced and rates can go through the roof,” says Curtis Arnold, founder of U.S. Citizens for Fair Credit Card Terms Inc., a consumer-advocacy group.

Consider the new offer from Citigroup Inc. The bank will give cardholders a credit of 10% on their total interest charge if they pay on time. That sounds enticing, except that if you don’t pay on time, your interest rate is 29%.

The new regulations, dubbed the Credit Card Accountability Responsibility and Disclosure Act of 2009, couldn’t come at a worse time for banks, which have been trying to rebuild balance sheets hit hard by the collapse of the housing bubble and the recession. Now, their credit-card operations are getting pounded by a downturn in spending and sharply higher defaults as unemployed Americans and other cash-strapped customers stop paying their debts. Last year, Bank of America Corp. and J.P. Morgan Chase & Co. suffered combined net losses of $7.8 billion in their credit-card operations, and this year will bring more red ink unless there is a miracle rebound.

The banks could be hurt further as consumers try to clean up their finances, especially high-cost credit card debt. The average American was running a credit-card balance of just over $5,400 at the end of 2009, down about $200 from five years ago, according to TransUnion, a Chicago-based firm that tracks credit data. In such an environment, consumers may push back against new card fees or jump to a rival issuer determined to compete by keeping fees low or nonexistent. 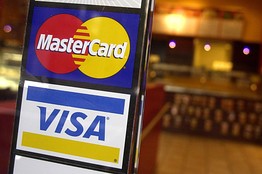 All this represents a huge change from three years ago when banks were tripping over themselves to issue credit cards to just about anybody, and consumers were on a spending spree. Banks have pruned many of their more profligate cardholders, and are using higher transaction fees to raise more money from cardholders who pay their bills each month rather than run up huge balances.

The biggest new tactic may be one of the oldest: raising rates. As long as credit-card companies inform you ahead of time and don’t make any sudden rate changes, they are mostly free under the law to charge whatever they want. They can raise the rate on new purchases made as long as they provide 45 days notice that they are doing so.

U.S. banks on average increased the interest rate on their credit cards by about two percentage points between December 2008 and July 2009, according to Pew Charitable Trusts, a nonprofit group. Some consumers say that their accounts have been hit with sudden interest-rate increases even if they haven’t been late on a payment.

Bank of America says it hasn’t raised interest on credit-card accounts since the law was passed last spring, except in the case where a cardholder has repeatedly paid late.

In a statement, Citigroup said: “We understand that customers don’t like price increases, especially in difficult economic times. However, these actions are necessary given the doubling of credit card losses across the industry from customers not paying back their loans and regulatory changes that eliminate re-pricing for that risk.”

Card companies also plan to collect more interest by switching customers to variable-rate cards from fixed-rate cards. Variable rates, which are linked to an index like the prime rate, are low now. But they give the companies more flexibility to collect a higher rate in the future as long as they alert customers to the terms now. Many card companies have already sent out notices that change the terms of the card contract to a higher or variable rate.

Cardholders should expect to see more fees for extra services, such as requesting a year-end itemization of all your purchases, paper statements or getting extended warranties on purchases. “You’re going to see a lot more tricks in terms of fees,” said Robert Manning, author of “Credit Card Nation” and founder of the Responsible Debt Relief Institute.

Banks already are reaping more fees on overseas transactions. Not only are they raising foreign-exchange transaction fees—the cost customers pay for purchases made in foreign currencies—but they are expanding the definition of what qualifies as a foreign transaction.

In the past, people who made online purchases from foreign merchants, or who traveled to a country where the purchases are often in U.S. dollars such as the Bahamas, were generally immune from paying such fees. But Citi and Bank of America recently imposed their 3% foreign-transaction fees on all foreign transactions—even if that purchase is charged in U.S. dollars. Discover Financial Services also began charging a new 2% for foreign purchases last year.

American Express Co., which is known for its lucrative rewards programs, recently added new fees to its co-branded Hilton Hotels, Starwood Hotels and Delta Air Lines cards. Cardholders who pay late will lose their rewards points. They can reinstate them to their accounts if they pay a $29 fee. An American Express spokeswoman said the fees are consistent with policies on its other cards and is aimed at encouraging cardholders to pay their bills on time.

For new customers, the days of 0% teaser rates and no-annual-fee boasts are dwindling. After cutting back substantially on mail offers, card companies are once again trying to woo new cardholders. But this time around, the avalanche of pitches are for cards that have annual fees or balance-transfer fees as high as 5% of the balance.

Avoiding such fees is sure to get trickier. Only about 20% of U.S. credit cards currently have an annual fee, according to industry statistics. But that number will likely rise because most direct-mail card offers are for premium cards loaded with reward programs—but also fees. Plain-vanilla cards that don’t have any annual fees (or rewards programs) represented just 11% of mail offers in the fourth quarter, according to Mintel Comperemedia, which tracks credit-card mail offers. J.P. Morgan’s Chase card unit and American Express are among those that have recently introduced new cards with annual fees.

Consumers can fight back against some of the industry’s tactics. You only need one or two credit cards that are widely accepted. So it can make sense consolidating debt on the card that has the lowest interest rate, assuming it makes sense after taking into account the balance-transfer fee.

True, shedding cards can hurt your credit score. But John Ulzheimer of Credit.com has a rule of thumb to preserve it while closing accounts: If you are able to keep your overall “credit utilization” on your cards—the amount of credit used as a percentage of your overall available credit—below 10% then closing accounts to avoid paying extra fees could make sense, he said.

So use the card or lose it because there may be a price to pay for inactivity. Fifth Third Bancorp is charging customers $19 if they don’t use their credit card in a year.

And there are ways to avoid annual fees. Citigroup is alerting some customers that it is assessing a $60 annual fee on their cards. The cure for that is simple. If you spend $2,400 on the card in a 12-month period, the bank will refund the fee.

Bob Depweg, who owns a security-consulting firm in the Los Angeles area, intends to keep playing hardball in order to what he wants out of his credit-card companies. Since the law was passed by Congress, he says he has successfully convinced American Express to drop its annual fee on his card by threatening to take his business elsewhere. And when Citi raised the interest rate on his wife’s credit card to 29.9% from 14%, he closed the account.

Regulations going into effect later this year will place even more constraints on credit-card companies. Starting Aug. 20, card companies will be required to review a customer’s interest rate every six months. Consumers will have the right to tell a credit-card company that they don’t accept a change of terms in their card agreement. The company will then be required to close the account and allow the customer to pay off the balance under the old terms.

Consumers who carry a balance may want to steer clear of retail cards, which woo customers with discounts. The money you save in the beginning could be eclipsed by the higher rates these cards typically charge as you pay off the balance.

Credit unions often offer lower rates than large banks, although some of their rewards programs are less generous than those of big banks. There are more than 8,000 credit unions in the U.S., and they tend to have pretty expansive definitions of who can join. The criterion for joining some credit unions is as simple as your Zip Code. Navy Federal, the nation’s largest retail credit union, offers rates as low as 7.9% on a basic platinum Visa card for three million members of the Army, Navy, Air Force, and Marine Corps and their families.

That compares with an interest rate as low as 11.99% on a Citibank Platinum Select MasterCard, touted as one of the cheapest rates around by Lowcards.com, a card-comparison Web site. The average rate at the end of last year was roughly 14%, according to the Federal Reserve.

Besides rates, reward programs are one of the other big considerations in choosing the right card. Cash-back cards are likely to offer the best deals in the new regulatory environment since banks have been making their own reward programs less rewarding. They are shortening the expiration periods, raising redemption fees or implementing earnings caps on rewards.

Although issuers have also been trimming cash-back rates in general—the standard rate today is 1% compared with 3% to 5% a few years ago—consumers can still earn higher rates by shopping in certain categories, such as gas or groceries.

“For the average person, if you’re going to do a loyalty rewards program, simple is best,” said Mr. Manning of the Responsible Debt Relief Institute. “Take the cash back.”