(CNN) — Judges in Texas and Florida have dropped military contractor KBR from lawsuits brought by the family of a soldier who was electrocuted in Iraq, the company announced Tuesday. 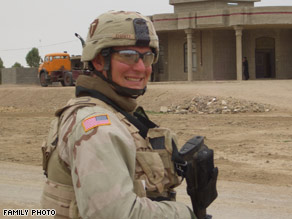 Sgt. Christopher Everett was electrocuted in 2005 at an American base outside Ramadi, in western Iraq.

Sgt. Christopher Everett died while using a power washer at an American base outside Ramadi, in western Iraq. His was one of nine electrocution deaths in Iraq blamed on “improper grounding or faulty equipment,” according to a Pentagon inspector-general’s report released Monday.

KBR was one of the contractors Everett’s family has sued in connection with his death. But federal courts in Louisiana and Texas have thrown out the family’s claims against the Houston, Texas-based company, KBR announced Tuesday.

“The dismissal orders affirm that despite repeated criticism and statements made by several public officials on Capitol Hill and related media reports, KBR had no involvement in the factors that led to the tragic death of Sergeant Everett,” Andrew D. Farley, the company’s senior vice president and general counsel, said in a written statement.

KBR’s work in Iraq and Afghanistan has come under extensive criticism from members of Congress. The company has defended its performance and argued that it was not to blame for any fatalities.

Monday’s report from the Pentagon’s inspector-general criticized the company in the death of another soldier, Staff Sgt. Ryan Maseth, who was electrocuted in his shower in his Baghdad quarters.

The report found that “multiple systems and organizations failed,” leaving Maseth “exposed to unacceptable risk.” It concluded that a water pump installed by KBR was not grounded, leading to Maseth’s electrocution when it short-circuited, and the company did not report improperly grounded equipment during routine maintenance.

But it also found that Maseth’s commanders failed to ensure renovations to the palace had been properly done and the Army did not set electrical standards for jobs or contractors.

Maseth’s family also has sued KBR. The company has had no comment on the inspector-general’s findings, but company spokeswoman Heather Browne says it was not responsible for Maseth’s death.

The building where Maseth was quartered was one of Saddam Hussein’s former palaces, and Browne said the building “had not been grounded or bonded by the contractors who built the structure.” In addition, she said, KBR had warned the military about the hazard nine months before Maseth’s January 2008 death.

“Prior to that incident, the military never directed KBR to repair, upgrade or improve the grounding system in the building in which Maseth resided, nor was KBR directed to perform any preventative maintenance at this facility,” she said in a statement issued to CNN.

But Maseth’s mother said she was “pleased” by the finding that KBR installed the water pump blamed for her son’s death.

“The results are revealing and contrary to what KBR and its president have continuously stated over the past year,” Cheryl Harris told CNN.

One Response to Claims against contractor dismissed in soldier’s death