(ABC)   A former rising star at the CIA accused of drugging, raping and taping Muslim women while stationed in the Middle East appeared before a federal judge in Virginia today after skipping a pre-trial hearing more than a week ago and going on what sources called an apparent drug binge. Andrew Warren was arrested after an intensive search by federal officials concerned he might be a danger to himself.

According to two federal law enforcement sources, drug paraphernalia and a handgun were found in the Virginia motel room where Warren, former CIA chief of station in Algeria, was arrested. Warren sat in a wheelchair during his Monday afternoon court appearance.

A person close to Warren told ABC News that State Department officials began searching for Warren 11 days ago after he missed a routine pre-trial appearance and could not be found. “His phones were shut off, and none of his family or friends had heard from him,” the person told ABC News.

Warren, 42, was located after federal law enforcement officers reached out to his friends and family, warning them that they were concerned for Warren’s safety and believed he was armed and consuming crack cocaine. He was arrested by local police, U.S. Marshals and the State Department’s Diplomatic Security Service at a Norfolk, Virginia Ramada Limited hotel late Monday. He was taken by law enforcement officials to a local hospital.

The former station chief’s fall from grace has been dramatic. According to two former CIA officials, Warren was a rising star at the CIA. He was a fluent Arabic speaker who had converted to Islam, making him an ideal officer in the Middle East for the intelligence agency. Officially, however, CIA has refused to acknowledge Warren was their spy.

Before being posted to Algeria, Warren had served in Egypt, Afghanistan , and a stint in that CIA domestic station in New York. It was in New York, a few years after 9/11, that supervisors spotted him as a potential star, ready to be deployed around the world as a spy. Within a very short time – four years – Warren had been posted as station chief in Algeria.

Warren worked for the agency in the Middle East until October 2008, until he was recalled from the region and then fired after two women came forward and accused him of rape, accusations which were first reported by ABC News’ Brian Ross in January 2009. He was charged with one federal count of sexual abuse in June. 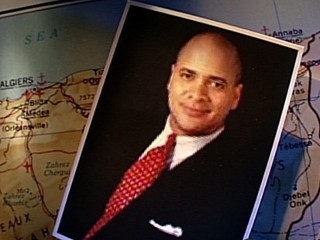 Andrew Warren was arrested in Norfolk, Va., on Monday, Apr. 26, 2010 at a local motel. He was wanted on a federal charge of sexual deviance

According to an affidavit filed by the Bureau of Diplomatic Security, two women in separate incidents alleged that Warren gave them drinks that caused them to pass out and then sexually assaulted them at his Algerian apartment while they were in a helpless unconscious or semi-conscious state. In the first case, the alleged victim claims that Warren prepared a mixed drink of cola and whiskey. The woman stated that she felt a “violent onset of nausea,” and Warren said she should spend the night at his home.

When she woke up the next morning, according to the affidavit, “she was lying on a bed, completely nude, with no memory of how she had been undressed.” She said she realized “she recently had engaged in sexual intercourse, though she had no memory of having intercourse.”

The second victim’s account also states that Warren allegedly drugged her before raping her. “While drinking the second apple martini, [Victim 2] suddenly felt faint and felt the immediate needed to vomit. V2 described the sudden and violent onset of the illness as nothing like the physiological effects of alcohol related sickness that she had experienced when she consumed alcohol on previous occasions. V2 stated she immediately began to pass in and out of consciousness. V2’s recollections of the ensuing events are characterized as passing in and out of consciousness, due to the debilitating effects of the illness,” the affidavit states.

“[Victim 2’s] next recollection was being located in Warren’s upstairs bathroom, on the floor. V2 could see and hear, but she could not move. Warren was in the bathroom, and he was attempting to remove V2’s pants. Although V2 could not physically resist Warren, she was able to speak, and she asked him to leave the bathroom. Warren continued to undress V2, and told her she would feel better after a bath. V2 stated that she had difficulty comprehending what was happening to her. Eventually Warren was able to remove V2’s blue jeans, boots, and her blazer,” the statement said.

Allegedly, the woman remembers being in Warren’s bed and asking him to stop, but according to the affidavit, “Warren made a statement to the effect of ‘nobody stays in my expensive sheets with clothes on.'” She told the Diplomatic Security agents that, “as she slipped in and out of consciousness she had conscious images of Warren penetrating her vagina repeatedly with his penis.”

Asked for a comment on the case in 2009, CIA spokesman George Little said in a statement, “We will continue to cooperate with law enforcement in this matter, which involves a former agency employee who was fired earlier this year.”

Warren pleaded not guilty to the charge of sexual assault in June 2009. He was released on his recognizance after his arraignment and has been living in the Norfolk area ever since. Morton Taubman, an attorney for Warren, said in 2009 his client is, “Not guilty…He is innocent.”

According to the Justice Department , if convicted, Warren could face life in prison.