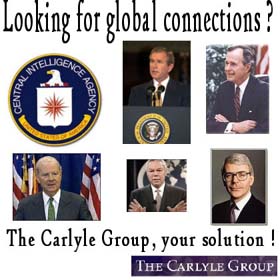 (ABC)   The Carlyle Group, a giant Wall Street firm best known for its ties to former President George H.W. Bush and other prominent public officials, made more than $13 million in payments to a indicted political fixer who arranged for the firm to receive business from a New York pension fund, New York attorney general Andrew Cuomo said today.

Cuomo said Carlyle had agreed to $20 million to “resolve its role” in the ongoing corruption investigation and agreed to a new code of conduct that prohibits the use of such middlemen.

Cuomo said the code would “help eliminate the conflicts of interest and corruption inherent in a system that allows people to buy access to those holding the pension fund purse-strings.”

Carlyle is the latest high-profile firm to be ensnared in a nationwide probe known as the “pay for play” scandal because Wall Street firms allegedly paid politically-connected fixers to get them business from pension funds controlled by public officials.

According to Cuomo, his corruption investigation found that in 2003, Carlyle hired Hank Morris, the chief political aide to then New York state comptroller Alan Hevesi, as “a placement agent” to help obtain investments from the New York Common Retirement Fund.

“If Boss Tweed were alive today, he would be a placement agent,” Cuomo said.

In a statement, Carlyle said it “was unaware of any improper conduct” and “was victimized by Hank Morris’ alleged web of deceit.” Carlyle said it intended to file suit against Morris and has “cooperated extensively and voluntarily” with Cuomo.

Carlyle paid Morris through shell companies he controlled, according to Cuomo. Morris allegedly shared the payments with a hedge fund manager, Barrett Wissman, who pleaded guilty earlier this year to securities fraud in connection with the investigation.

Until it hired Morris, said Cuomo, Carlyle had “experienced limited success in obtaining investments” from the New York state fund.

Carlyle then received more than $730 million in New York state pension funds for five different projects, according to Cuomo.

Carlyle employees also made about $78,000 in campaign contributions to Comptroller Hevesi’s campaign in 2005 and 2006, according to Cuomo, some solicited by Morris.

Morris was indicted in March in the “pay for play” investigation for allegedly arranging “sham placement fees” for himself and other Hevesi “political cronies” and for extracting “millions of dollars in campaign contributions” to ensure “the Comptroller’s approval of their proposed investments.”

Morris has pleaded not guilty to the charges.

Hevesi has not been charged.

Carlyle is the first firm to sign the Code of Conduct, which Cuomo first proposed in April. The Code eliminates the role of middlemen who are hired, retained or compensated for the specific purpose of obtaining pension dollars. The language is carefully worded to allow for the use of marketing department employees and marketing firms.

According to union records, Carlyle received $878 million in private equity investment from “the New York State Common Retirement Fund.” The fund’s $122 billion in assets is for the retirement benefits of state and local employees in New York. The state paid total management and incentive fees of $37.5 million between 2005 and 2008 to Carlyle, according to fund records. The fund is the third largest in the nation.

The firm has allowed only two outside partners into its ranks over the years.

The other is Abu Dhabi, the once high growth sheikhdom that paid about $1.5. billion for 7.5 percent of the firm.

Cuomo’s wide ranging probe has already resulting in two guilty pleas in New York State. According to published accounts it is said to be one of 30 such probes across the nation. The Securities and Exchange Commission has filed a related civil suit.

In the closely regulated and monitored world of public employee fund investment, the use of unregulated middlemen has been a loophole through which, in return for passing public funds to private firms, at least in some cases, public corruption has resulted, Cuomo’s office has charged. The practice is rife with the potential for quid-pro-quo, including pay-for-play political contributions, and revolving door government to private sector job hopping, his office and union officials have said.

At the end of April, Cuomo said that practice of using unregulated middlemen to garner public pension fund dollars results in “the worst of both worlds.”

“This is the nexus of private-sector fraudulent operators meeting fraudulent government and political operators,” Cuomo said, according to Bloomberg News.

At the center of the storm is one time New York Democratic Party operative Morris who is accused of steering state pension fund business to firms that paid him millions in kickbacks. Morris is the target of a 123 count indictment unsealed by Cuomo’s office in March. It accuses Morris of pension fund related activities including “enterprise corruption, securities fraud, grand larceny, bribery and money laundering.”

At the time of the indictment Cuomo’s office said in a statement, “If proven, the allegations in the indictment reveal a complex criminal scheme involving numerous individuals operating at the highest political and governmental levels of the Office of the State Comptroller. The charges entail a web of corrupt acts for both political and personal gain.

Also under scrutiny is a firm co-founded by Steve Rattner, President Obama’s auto industry Czar. That firm, Quadrangle, used Morris firm and is under the spotlight for allegedly failing to disclose the relationship.