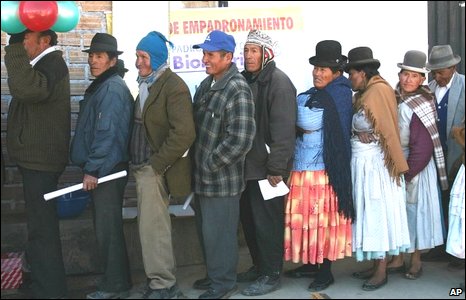 Bolivia is preparing for a number of elections in December

The Bolivian government has begun implementing provisions outlined in the new constitution that give indigenous people the chance to govern themselves.

These referendums will take place in December, alongside presidential and parliamentary elections.

The new charter was bitterly opposed by Bolivia’s traditional elite.

On Sunday, the provisions allowing for votes on indigenous autonomy were presented in a special event in the eastern region of Santa Cruz.

Mr Morales said it was “a historic day for the peasant and indigenous movement”.

“Your president, your companion, your brother Evo Morales might make mistakes but will never betray the fight started by our ancestors and the fight of the Bolivian people,” he said.

Mr Morales has championed Bolivia’s indigenous people, who for centuries were banished to the margins of society and did not enjoy full voting rights until 1952.

But many opposed to Mr Morales and the new constitution believe he is polarising the country by dividing it along along racial lines.

Many Bolivians of European or mixed-race descent in the fertile eastern lowlands, which hold rich gas deposits and are home to extensive farms, rejected the constitution.

The new charter came into force in February after being approved by 61% of the electorate.

It enshrines state control over key economic sectors, and grants greater autonomy not only for the nine departments but also for indigenous communities.

But the clauses regarding layers of autonomy could lead to a raft of competing claims, correspondents say.