By POPEYE
Tweet
(ABC)   While Executives Get Bonuses, John Woodson Gets “Cheapest They Could Get Away With”

An Oklahoma man who lost an eye and a leg in Iraq says the giant insurance company AIG refused to provide him a new plastic leg and fought to keep from paying for a wheelchair or glasses for the eye in which he has 30 percent vision.

AIG has made everything a battle after injury, he says.

“They bought the cheapest thing that they could get away with,” said 51-year old John Woodson, a truck driver for the KBR contracting firm who lost his leg when his truck hit a roadside bomb in Iraq.

“Everything’s been a struggle, a constant fight,” said Woodson, injured in Oct. 2004. “It’s been hell since.”

Woodson is covered by AIG under a government-mandated program that provides medical and disability benefits for employees working for U.S. contractors in Iraq and Afghanistan. AIG covers about 90 percent of the claims for overseas workers.

Still in constant pain, Woodson says he was infuriated to see AIG executives receive huge bonuses, travel on private jets and be pampered at a California spa.

“They’re getting their bonuses but they fight you, they’ll constantly fight in order to try to get you to give up,” said Woodson, of Poteau, Oklahoma.

Woodson is one of a number of injured contractors whose alleged difficulties with AIG were examined in the joint investigation.

AIG said it could not discuss any specific case, but that it strives to provide “quality” care.

In Woodson’s case, when his fuel truck hit the hidden bomb outside Baghdad, he was blown through the roof of his cab and thrown about a hundred feet away, also damaging his back and breaking his pelvis.

Woodson says he was told by an AIG representative in the hospital that he would be fully covered by AIG, but that when he returned home, he quickly discovered AIG was prepared to challenge almost all of his medical needs. 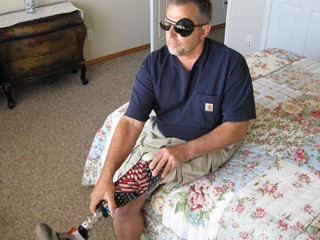 John Woodson, a truck driver for KBR who lost his leg when his truck hit a roadside bomb in Iraq,…

AIG Refused to Buy Him a New Leg, Woodson Says

“I’ve had to argue for everything, you constantly stay on the phone, writing letters, e-mailing, trying to get things to happen,” Woodson said.

To cushion the impact on his injured back and pelvis, Woodsen asked AIG for a new plastic leg with a spring in the foot.

“It was just so painful just to walk,” Woodson said.

He says AIG refused to buy him a new leg, which he says would have cost about $8,000.

AIG also refused, he said, to provide him a water-proof leg so he could remain standing and take a shower.

In the end, Woodson says he thinks it was pressure from his lawyer and Sen. Tom Coburn (R-OK) that forced AIG to finally provide an improved leg, with replacement parts, but not a new one as his doctor had ordered.

Woodson’s lawyer, Toby Cole, says he sees a pattern of AIG “delaying and denying” claims from contractors injured in Iraq and Afghanistan.

“It’s difficult for me to think it’s anything but a concentrated effort just to ignore these guys,” said Cole.

In its statement, AIG says the “vast majority” of claims are “paid without dispute when the proper supporting medical evidence has been received.”

More than 30,000 contractors have filed claims for injuries suffered in Iraq and Afghanistan. More than 1,400 have died.