(CNN)   Retired Command Sgt. Maj. Basil L. Plumley, who fought in some of the U.S. Army’s bloodiest battles in three wars, died Wednesday in Columbus, Georgia. He was 92.

Plumley saw action in some of the largest battles of World War II, including the Battle of Normandy, the Battle of Salerno in Italy and Operation Market Garden.

He then fought in the Korean War, but it was his role in the Battle of Ia Drang Valley in Vietnam that brought him the most fame. The battle was chronicled in the book “We Were Soldiers Once … and Young,” which was later a 2002 movie starring Mel Gibson. Sam Elliott played Plumley. 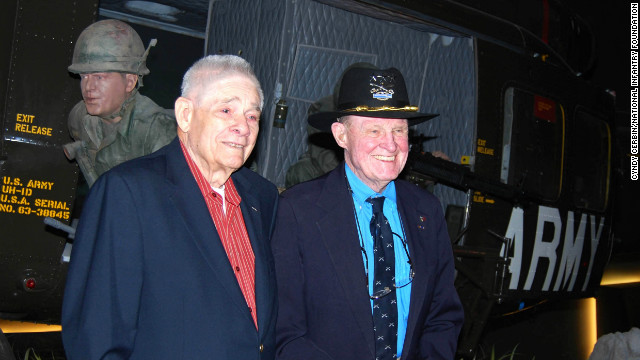 The National Infantry Museum at Fort Benning, Georgia, tweeted a picture of Elliot and Plumley in noting the veteran’s death.

Plumley, along with Lt. Gen. Hal Moore, led the Army’s 1st Battalion, 7th Cavalry Regiment in the November 1965 battle that saw 450 U.S. forces face off against 2,000 troops from the North Vietnamese army in the first major engagement between the two armies. More than 230 U.S. troops were killed.

Plumley was at Landing Zone X-Ray, where 79 U.S. troops died.

“That was a long day. I was the second one in and next to the last to leave,” Plumley was quoted as saying by The Bayonet in 2010 when he donated a large print of himself and Moore in Vietnam to the National Infantry Museum.

“Command Sgt. Maj. Plumley was a true American hero who spent much of his life placing his nation and its greatest ideals ahead of his own well-being,” Maj. Gen. Anthony Ierardi, commanding general of the 1st Cavalry Division in Fort Hood, Texas, said in a statement Wednesday. “He served with great valor and distinction in three wars and continued to mentor soldiers and leaders well after his retirement from active duty. The command sergeant major touched countless lives in his more than 30 years in the Army.”

At a reunion of Ia Drang veterans this year in Columbus, Plumley talked about the troops he helped lead, according to a report on the U.S. Army’s website.

“That battalion was the best trained, in good physical shape and most disciplined that I’ve ever seen,” he said. “We did real hard training at Fort Benning before we went into X-Ray. … But that battalion was made up of hard, disciplined, well-trained and well-commanded soldiers who didn’t give a damn how rough their training is as long as you’re fair about it. I was glad to have been a member of it.”

Plumley was a larger-than-life figure, who had the respect of those on the battlefield, according to Joe Galloway, a reporter who was at Ia Drang and later wrote “We Were Soldiers” along with Moore. At the May reunion, he told of the scene when Plumley showed up at another Ia Drang vets reunion years earlier.

“It was up in the hospitality room, and everybody’s had a few pops. All of a sudden, Sgt. Maj. Plumley arrives, steps in the door,” Galloway said. “And I saw guys who had served a two-year draftee tour in the Army and had been out for 25 or 30 years, turn white, backs against the wall. As the sergeant major made his way into the room, they made their way along the wall and out the door. They were afraid he still had their name and number.”