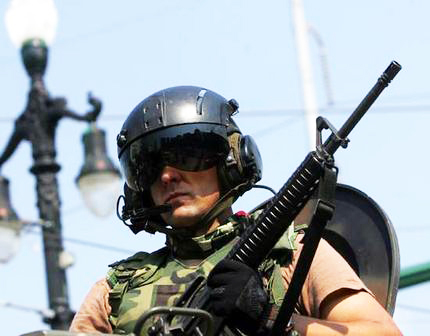 (PRISON PLANET)   A newly leaked US Army Military Police training manual for “Civil Disturbance Operations” outlines how military assets are to be used domestically to quell riots, confiscate firearms and even kill Americans on U.S. soil during mass civil unrest.

The document (PDF), which is dated 2006 and was used for a self-learning course at the U.S. Army Military Police School at Fort McClellan, makes it clear that the operations described in the manual apply to both “CONUS and OCONUS,” meaning inside the Continental United States and outside the Continental United States.
The document outlines how military assets will be used to “help local and state authorities to restore and maintain law and order” in the event of mass riots, civil unrest or a declaration of martial law.
The primary function of military assets will be focused around, “breaking up unauthorized gatherings and by patrolling the disturbance area to prevent the commission of lawless acts,” states the document, adding, “during operations to restore order, military forces may present a show of force, establish roadblocks, break up crowds, employ crowd control agents, patrol, serve as security forces or reserves, and perform other operations as required.”