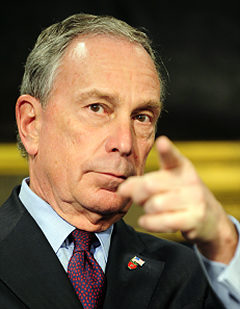 (AMERICAN THINKER)   If we all had half a dozen bodyguards to protect us like New York Mayor Michael Bloomberg, we might all think that Florida’s “stand your ground” law and other self defense measures were a “license to murder.”

But most of us aren’t that lucky – which is why most of us thank the Lord that we live in a country with a second amendment.

The so-called Stand Your Ground self-defense laws in Florida and some other states amount to “a license to murder” and an excuse for “vigilante justice,” New York City Mayor Michael Bloomberg charged Wednesday.

Actually, a “civilized society” would not leave its members defenseless against modern day Visigoths who rape, kill, and plunder at will in places like New York city where it is a criminal act to carry protection from someone doing harm to your person or property.

“Plain and simple, this is just trying to give people a license to murder,” he added of the Stand Your Ground laws.

The laws are enacted in roughly two-dozen states but have been under intense scrutiny since the death of Trayvon Martin, an unarmed black Florida teen, whose shooter, neighborhood watch volunteer George Zimmerman, claimed self-defense.

Florida’s 2005 Stand Your Ground law protects shooters who claim self-defense in a wide range of places, including on the street or in a bar. According to the law, a person who believes their life is danger or could be seriously injured in any place they have a right to be “has no duty to retreat” and “has the right to stand his or her ground and meet force with force, including deadly force.”

The facts are these: If you are confronted by a criminal bent on doing harm to you, you are on your own. The police cannot help. It is likely that no bystander will give you aid. It is just you and the criminal who may or may not spare your life in pursuit of your wallet or, in the case of home invasion, your valuables.

Why is it “civilized” to stand there and possibily lose your life, or get beaten up? Who has made the determination that it is civilized “progress” to disarm the law abiding population and leave them at the mercy of criminals without conscience or fear?

It is a sign of just how brainwashed some of us have become that we allow the foes of the second amendment to make this spurious argument. If police could magically appear in the nick of time to protect you or your loved ones from the barbarians of the world, we wouldn’t be having this debate. But, at bottom, what opponents like Bloomberg are saying is that it is better that you die in the name of “civilization” than have the means to protect you and yours from death.

It places a heavy burden of responsibility on the private citizen not to use their weapon unless truly in danger. Claims of justifiable homicide are up in Florida and other states that have “stand your ground” laws and it certainly complicates matters for prosecutors as we have seen in the George Zimmerman case. It may even be efficacious to examine these laws for defects and amend them if necessary.

But give me those complications and allow me to protect myself if I choose to do so. That is the essence of liberty and personal responsibility. And that’s how it should be in Florida, and even New York City.