(WEEKLY INTERCEPT)   Those of us who love sweet delicious honey have good reason to be concerned, as over 10 million bee deaths were recently reported in Florida.
“We work really hard on these bees to keep them in good health.” 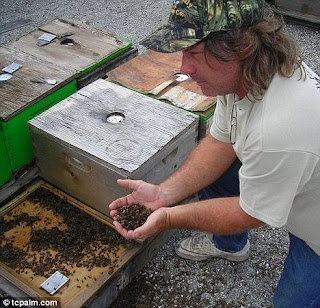 Smith doesn’t just conduct bee business in Florida; he says that the bees he cares for are shipped to farmers all over the United States to help pollinate crops.

Whether people realize it or not, humans actually are somewhat dependent on bees for survival. That’s why the next part of this story will anger some people.

Experts are saying that the massive amount of bee deaths display signs of pesticide poisoning, and state officials are currently testing the dead bees to determine if the pesticides were responsible for the mass deaths.

The Brevard County Sheriff’s Office is looking into the deaths because they think it could possibly be a crime. The bee deaths occurred at 30 sites and covered a mile-and-a-half radius.

“The fact that it was so widespread and so rapid, I think you can pretty much rule out disease,” Bill Kern, a University of Florida entomologist said.

“It happened essentially almost in one day. Usually diseases affect adults or the brood, you don’t have something that kills them both.”

Why is this upsetting to some? Because county officials in the area sprayed mosquito-killing pesticide from the air last week. But they claimed the poison dissolves quickly and has no effect on the bees.

“I’ll never get completely compensated for this unless someone handed me 400 beehives,” Smith told Treasure Coast Newspapers. “I lost the bees, the ability to make honey and the ability to sell the bees.”

Of course, this isn’t the first time there has been a massive bee die-off. But it is one of the first times that a bee die-off can be linked so closely to government spraying of pesticides.

The spraying of pesticides is supposed to benefit people by controlling pests – but could actually be  harming people more than pesky mosquitos.

If the massive bee deaths are considered a crime and traced to the government pesticide spraying, will the bee keepers be properly compensated? And will those responsible commit to ending the spraying to save bee colonies?

These are questions that will hopefully be answered soon.