The Bilderberg Group – Most powerful elite will meet in Athens 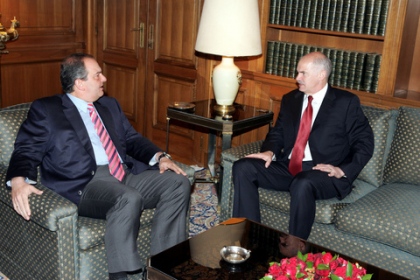 3/29/09 – (GR Reporter) -The Bilderberg club is famous for gathering the most powerful people in the world at least once per year. There, they can talk behind closed doors. This year, the club will organize its meeting in Athens between 14th and 16th of May, says Elefterios Tipos newspaper.

In the list of invited guests are the Queen of Netherlands Beatrix, the Spanish Queen Sophia, and diplomats from the rank of the US National Security Council James Jones. Also among the invited are ministers of foreign affairs like the Turkish one Ali Babacan, who will get the chance for a tête-à-tête meeting with the Greek minister of foreign affairs Dora Bakoyanni. Except for political figures, the meeting will host representatives of giant companies like Domenico Siniscalco from “Morgan Stanley”.

From Greek side participants will be the Prime Minister Kostas Karamanlis and the leader of the opposition party PASOK Georgios Papandreou, as well as ministers and powerful figures from political and public life of the country like the president of the National Bank of Greece Takis Arapoglou and the chairman of the public telecommunications company OTE Panayotis Vourloumis.