Pictured below is the cover of the latest geometry book being used by California High Schools for classes and instruction. The astute observer will note various occult—and most decidedly—satanic symbols in use by the illustrator of this schoolbook. The book has a current publication date and is brand new.

Books have to go through several stages of review and approval before publication at all levels of the publishing process: layout, design, legal, marketing, editorial, as well as other reviews, long before a single book is printed. Once it passes through these various stages, then it is finally printed and sold to whatever school boards buy them for their teachers and classes.

Before we get started, the plausible deniability of these occult symbols will be that they are in fact, just regular geometric figures and therefore nothing more should be read into them. However, anyone who even slightly looks at the Satanist realities will notice that these are also the main symbols of every satanic order on earth and are used to dark purposes across the globe. That the publishers chose them for a book tells us many things.

A.)   The upside-down five pointed star, or the sign of the baphomet. This is the inversion of the natural order of man, the upright symbol being most ancient and denotes human perfection guided by God. When inverting the symbol, the user denounces God and puts matter over spirit. In occult usage, it is used for channeling dark energies or energies of the lower dimensions, among other things.

B.)   Masonic checkerboard. Though in use by the masons in modern times, it comes from ancient Egypt, Chaldea, and the Temple of Solomon. Many European manors and churches also use the tiled floor in such a fashion.

C.)   The Masonic “G” which is the symbol for Lucifer. The cover story is that it means God, but research indicates that is a misdirect. Of course, from their point of view, it is their god: Lucifer.

D.)   The 47th problem of Euclid, which indicates a Masonic rite and degree. Once the neophyte has passed this way-point, he is firmly upon the luciferic path.

E.)   The 8 pointed star or as it commonly known among Satanists, the witches circle. This is also known as the quarter/cross-quarter sabbat symbol, which designates their 8 satanic sabbats that all witches, wizards, and anyone following the dark path considers dark spiritual holidays.

F.)   The pyramid capstone of their unfinished work, which is to turn the planet into an unholy playground of the satanic controllers.

G.)   The upside-down cross, or “witches foot” or “broken cross” which indicates that they are in opposition to true Christianity. This and the inverted five-pointed star are the two most decidedly satanic symbols on this book.

I.)   Yet another implied inverted pentacle.

J.)   The Fibonacci spiral. In honor of Fibonacci, a black magi.

K.)   Here’s another 47th problem of Euclid. They are really beating this one into the ground.

L.)   Yet another G symbol for Lucifer.

As we can see, both the front and back covers have the same symbols given over in slightly different fashion and are the MAIN symbols of Satanists everywhere the world over. That says a great deal, doesn’t it?

It also tells us that they consider the use of symbols to be potent and energetic realities or they simply wouldn’t bother using them. If anything, the dark side only expends energies in directions that yield results. It’s a matter of simple pragmatism.

Take a look at your text books and those of your children. It doesn’t begin or end with geometry books. These satanic symbols are hidden in plain site on ALL text books, one way or another, even layered in the background of images so they often appear in the shadows, or in clouds, or whatever. 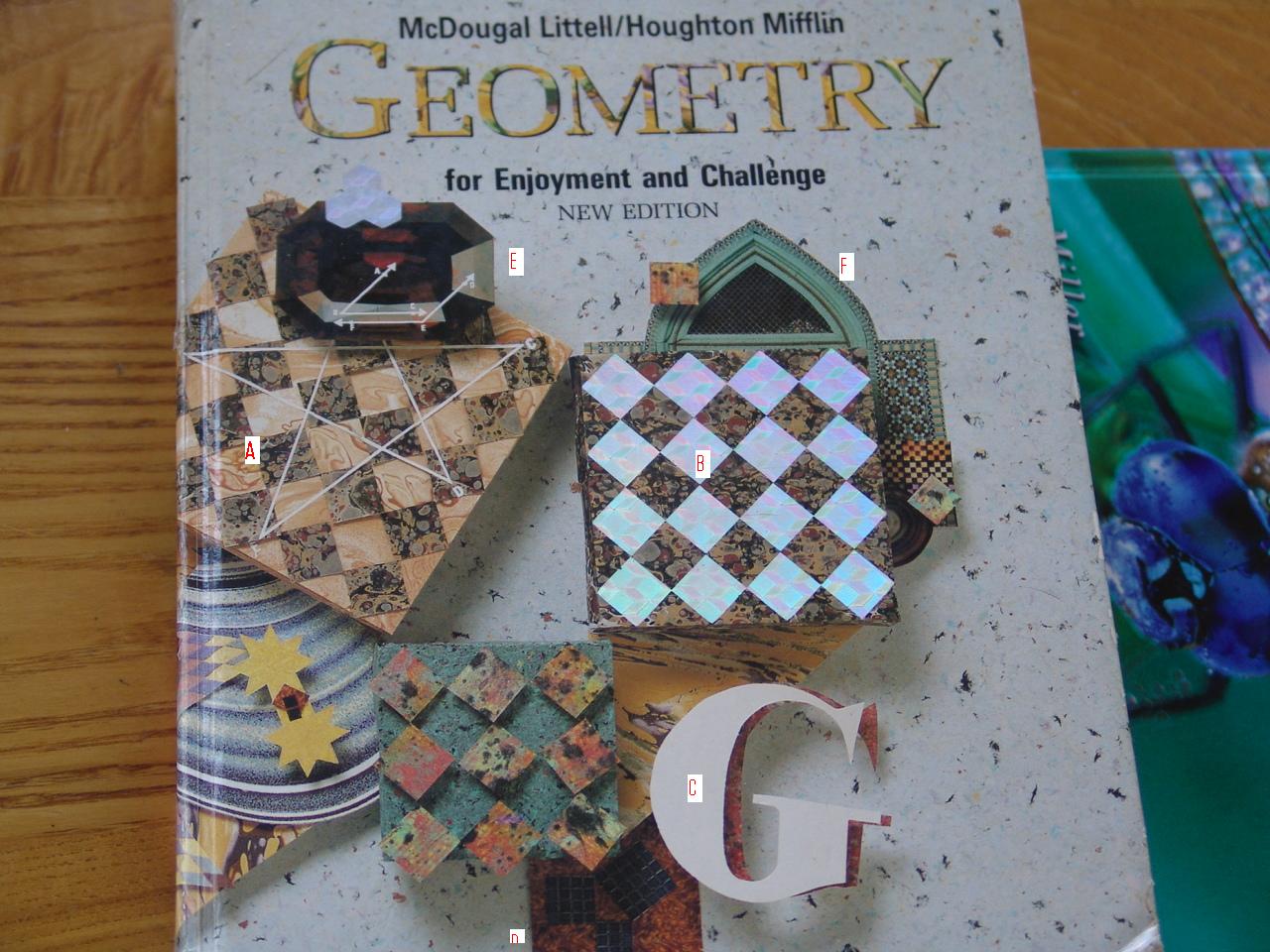 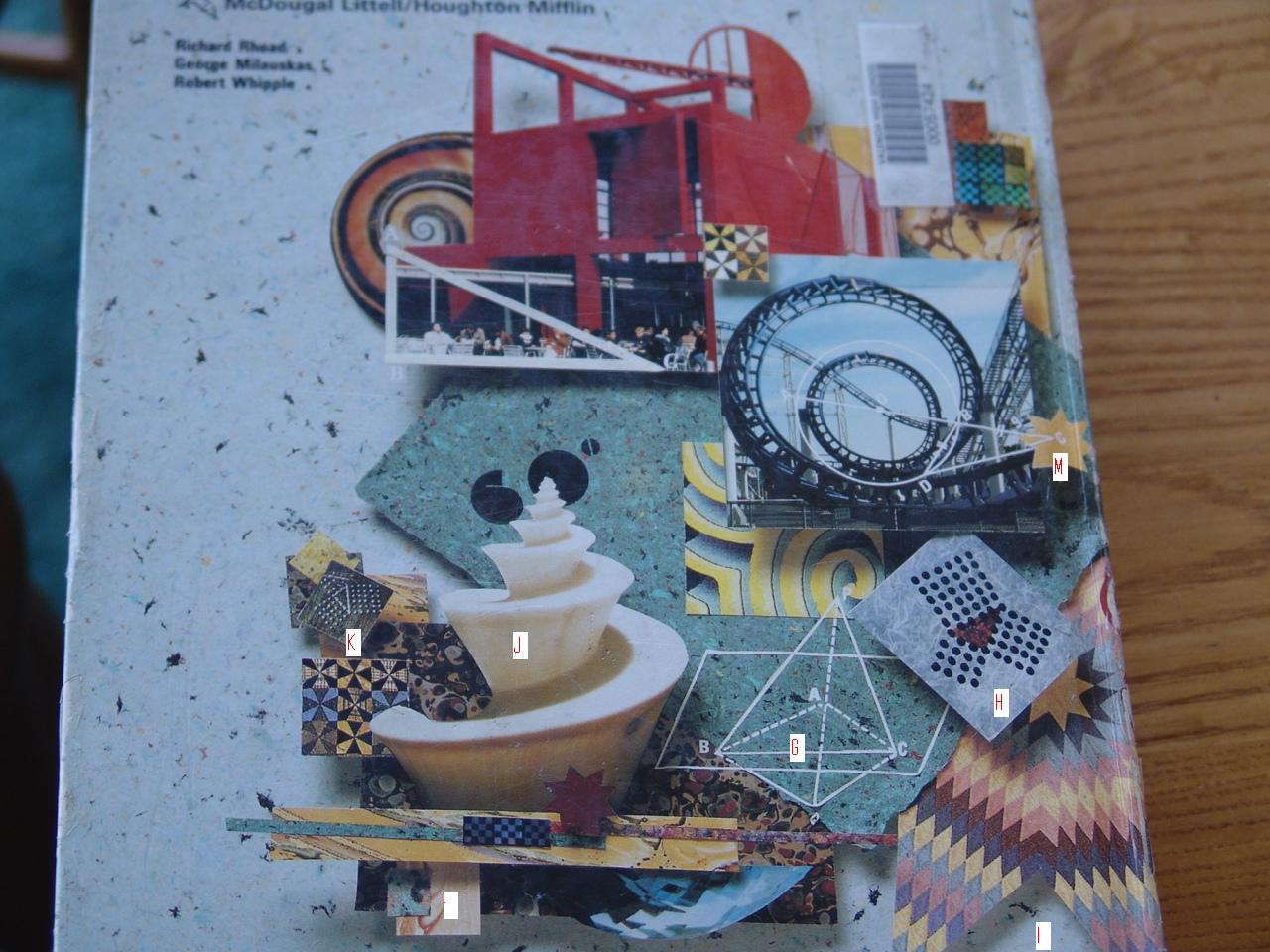